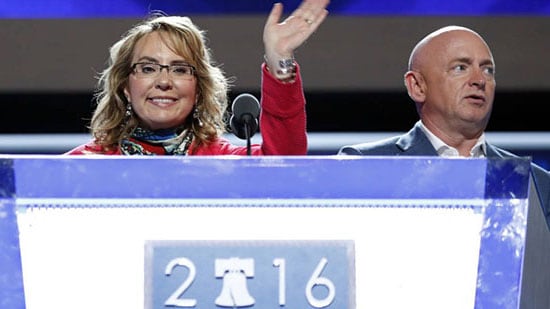 Former Rep. Gabby Giffords, D-Ariz, waves from the podium as her husband Astronaut Mark Kelly (ret.) looks on during a sound check before the start of the first day session of the Democratic National Convention in Philadelphia on  July 25, 2016 (Photo: Carolyn Kaster/AP Photo)

Former Arizona Congresswoman Gabrielle Giffords stumped for Question 1 in Las Vegas over the weekend, urging voters “to come together and be responsible” in support of the controversial ballot measure.

“Stopping gun violence takes courage – the courage to do what’s right and the courage of new ideas. I’ve seen great courage when my life was on the line,” Giffords said during a rally Saturday. “Now is the time to come together – to be responsible. Democrats, Republicans – everyone. We must never stop fighting. Fight, fight, fight!”

Giffords and Kelly joined Shannon Watts, founder of Moms Demand Action for Gun Sense in America, in a “get out the vote” canvassing event across the city Saturday.

“This campaign is so important because we know that background checks save lives,” Watts said. “In the states that have laws similar to Question 1, there are fewer women shot and killed by an intimate partner, fewer law enforcement fatally shot in the line of duty, and less gun trafficking in cities. Background checks will help save lives here in Nevada and help to make all of us safer.”

Question 1 would require background checks on most private sales and transfers in Nevada. Proponents believe the measure will close the so-called “gun show loophole” and prevent criminals and other dangerous persons from circumventing background check laws through online and private purchases.

Bloomberg and his group, Everytown for Gun Safety, have funneled $13 million to Nevadans for Background Checks, the state political action committee devoted to getting Question 1 passed. He also has ties to Mom’s Demand Action and Mayors Against Illegal Guns and donates millions to gun control ballot initiatives nationwide, including Question 3 in Maine.

“We are honored to be joined today by national gun violence prevention advocates who recognize the importance of passing Question 1 and understand that closing the background check loophole will reduce gun violence and save lives in Nevada,” said Joe Duffy, campaign manager for Nevadans for Background Checks.

In the five years since, Giffords and Kelly created the political action committee Americans for Responsible Solutions to support lawmakers at the state and federal level who support stricter gun control measures.