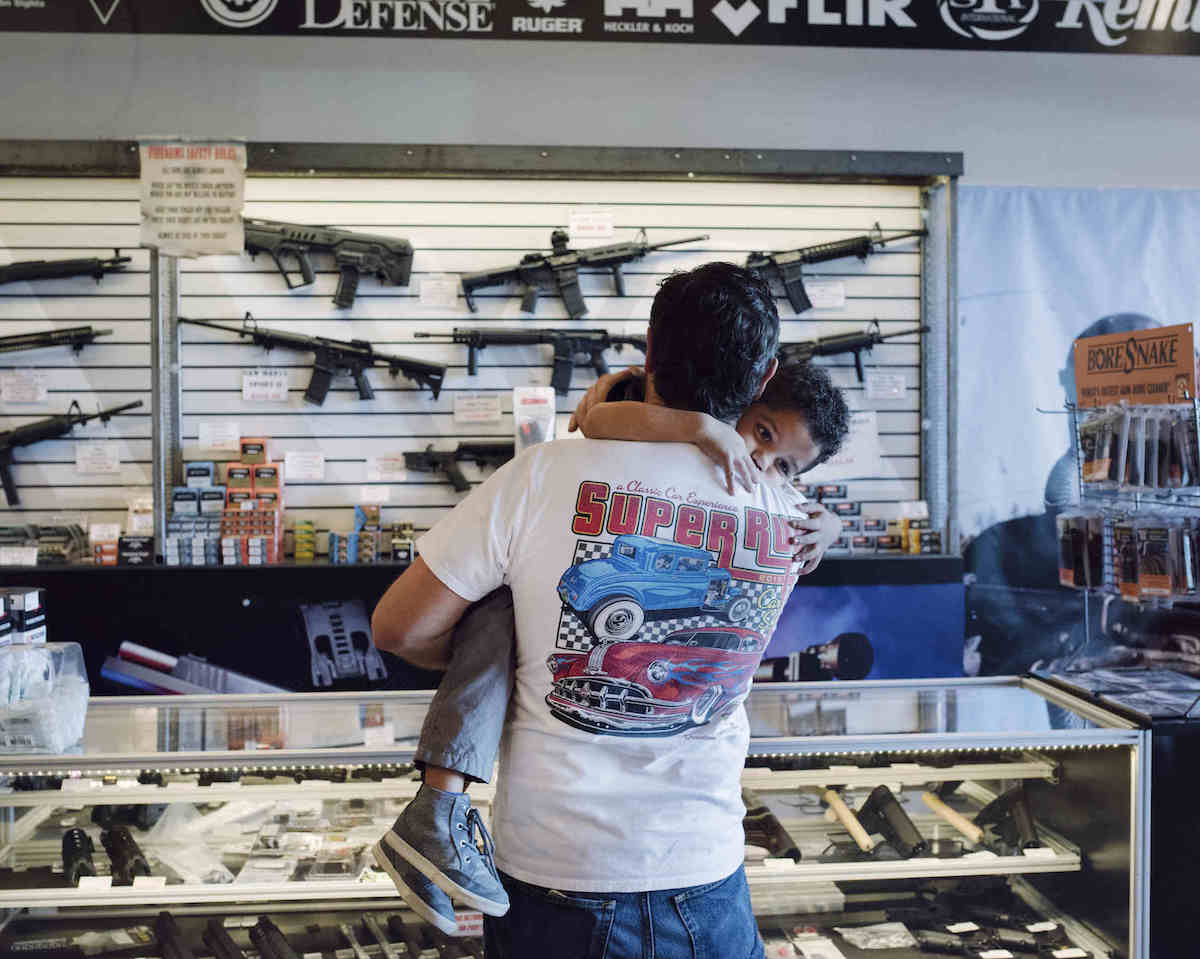 A father holds his son while checking out guns on display at Westside Armory, Las Vegas. (Photo: John Francis Peters)

Gun stores across the country are ramping up anti-Clinton advertising hoping to send more guns out their doors ahead of Election Day.

Eliciting fear, advertisements tout pre-election sales and subtly remind owners of Hillary Clinton’s stance on guns. The ads and rising fear of a Clinton presidency, seem to be working on Second Amendment supporters who are pushing sales to record breaking heights.

Firearms sales in total have surged this year, with October representing another big month. The Federal Bureau of Investigation’s National Instant Criminal Background Check System reported more than 2.3 million background checks last month. Though the NICS doesn’t actually track sales, it does offer a glimpse into how many Americans are turning to guns.

“I can’t say whether it’s all due to the election and extra stuff on the ballot, but it is certainly a possibility,” said Jim Curcuruto, director of industry research for National Shooting Sports Foundation.

The NSSF estimated the number of background checks nationwide in October rose 11.7 percent over the same month in 2015.

Las Vegas gun store, Westside Armory’s told Bloomberg News that gun sales in the Las Vegas store are up and for big reasons.

The store made headlines nationwide with its ad in a local newspaper. “Pre-Hillary sale. Don’t wait! Prices will skyrocket after Crooked Hillary gets in,” Westside Armory’s ad read.

David Strickroth, owner of High Impact Tactical Firearms out of Upland, Calif. says  “panic” is the driving force behind Americans flocking to gun stores. Gun owners, he says, are nervous about what the election could hold either way.

“Doesn’t matter what side somebody’s on,” Strickroth told NPR. “It’s just that what’s said [during the election] generates an angst in people that makes folks either feel ‘I’ve got to get rid of this’ or ‘I’ve got to go get me one.’ “ 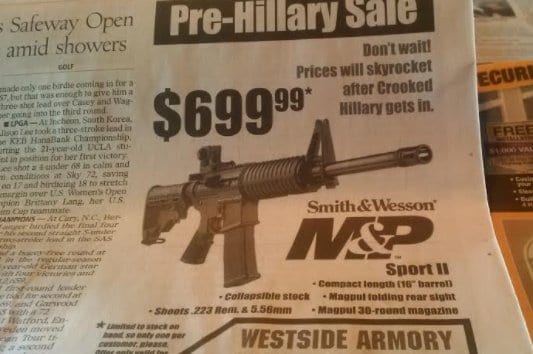 “The thought process being if a certain candidate was elected, these guns, you may not be able to buy them maybe after the first of the year,” Hopkins told local news outlet WVTM 13. “So they’re wanting to go ahead and buy them just in case you won’t be able to purchase them anymore.”

Alongside smaller shops lining their ads with pre-election verbiage, big name manufacturer Beretta used the election as an opportunity to sell magazines. The company offered 20 percent off the price of magazines, an obvious nod to Clinton’s stance limiting magazine capacity.

The National Rifle Association has spent more than $29 million in support of Donald Trump or against Hillary Clinton this election cycle. The organization endorsed Donald Trump earlier this year at the NRA convention in Louisville. A majority of the ads have targeted voters in battleground states like North Carolina, Nevada and Ohio. Invoking images of imminent danger, the lobbying group is using fear to convince gun advocates and those on the fence to vote for Donald Trump.

“Hillary Clinton could take away her right to self-defense,” a voice in one ad says. “And with Supreme Court justices, Hillary can. Don’t let Hillary leave you protected with nothing but a phone.”

In addition to videos, NRA-ILA Executive Director Chris Cox and CEO Wayne LaPierre co-penned a letter stressing the importance of the upcoming election.

“The stakes in this year’s presidential election could not be higher. For gun owners, the choice is clear,” the letter reads. “As Election Day draws near, gun owners must take every opportunity to defeat Hillary Clinton and to protect our firearm freedoms for present and future generations.”

For what it’s worth, Clinton maintains she does not intend to repeal the Second Amendment.

“I respect the Second Amendment,” Clinton said in the last presidential debate. “I also believe there’s an individual right to bear arms. That is not in conflict with reasonable, common-sense regulation.”

If the volume of sales is any indiction, gun owners aren’t buying it.