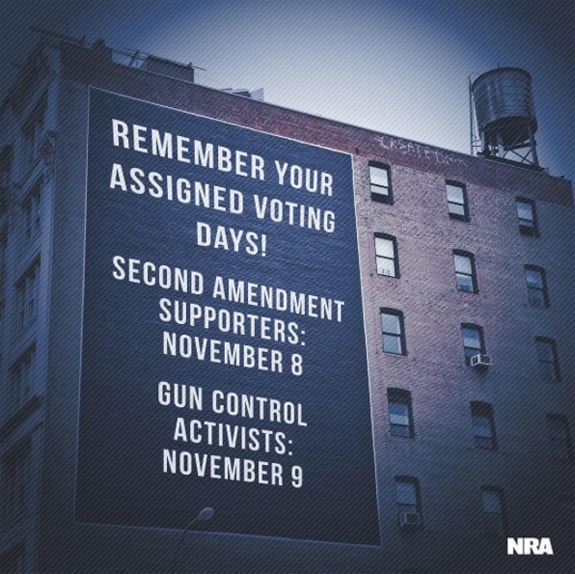 Just to be clear: election day for all voters — both pro- and anti-gun — is Tuesday, Nov. 8, 2016. To find out where you are registered to vote, check out HeadCount.org or Google.

The NRA has spent more than $50 million on federal elections, according to the Center for Responsive Politics. Roughly $20 million has gone toward preserving Republican congressional seats and more than $30 million to keep Hillary Clinton out of the White House.

The NRA has been running an anti-Clinton campaign since its annual meeting in 2015 when its chief executive officer Wayne LaPierre stated “eight years of a demographically-symbolic president is enough.” He warned President Obama has been planning for a Clinton Administration to continue an anti-gun agenda.

Despite his anti-gun comments in the past, the organization endorsed Donald Trump in April. He said he has come to embrace the ideas of gun rights advocates. In fact, last week he launched the Second Amendment Coalition in conjunction with the NRA and pro-gun politicians and celebrities.

The NRA has also maintained support for the candidate since endorsing him even through his divisive rhetoric that sometimes conflicts with its own message. The organization has argued the next president will appoint at least one new Supreme Court Justice who could tip the balance of the high court.