2 versions of the story in Chicago police involved shooting 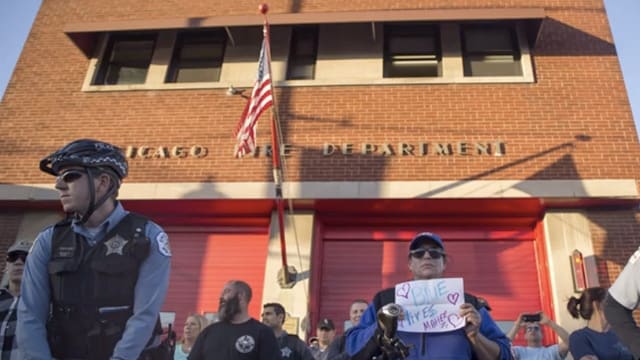 Protestors clashed Sunday near the site of a fatal police shooting on Chicago’s Southwest Side. (Photo: Alyssa Pointer/Chicago Tribune)

Tensions are running high on Chicago’s Southwest Side after a road rage incident Saturday led to an officer-involved shooting that left an Indiana man dead.

Chicago Police say Joshua Beal, 25, pointed a gun before he was shot multiple times by an off-duty officer. The department says a screengrab from a video of the incident is legitimate. The photo appears to show Beal pointing a gun.

Police say the incident started when Beal and members of his family parked their car in front of a firehouse as they left a funeral in Chicago’s Mount Greenwood neighborhood. An off-duty firefighter told them to move the vehicle, and a confrontation began.

Beal’s family tells a different story. They say the off-duty officer who was in an unmarked car cut someone off during the funeral procession. That’s when Beal and his family got out of their cars and argued with the off-duty officer. The family says Beal didn’t provoke the officer.

“Chicago police gunned my baby down like a vicious animal,” Beal’s mother, Tiffaney Boxley said, according to ABC7 in Chicago. “They shot him twice in the back and three times in his front.”

On Sunday, about a dozen protestors rallied against police violence near the site of the incident. Mount Greenwood has a large population of police and fire officials, and the protestors were met with more than 200 people telling them to “go home” and holding signs that read “Is self-defense a crime?”

A police spokesman says one of the officers involved in the incident was hospitalized with non-life threatening injuries. The Cook County Medical Examiner’s office says an autopsy revealed Beal was shot multiple times.