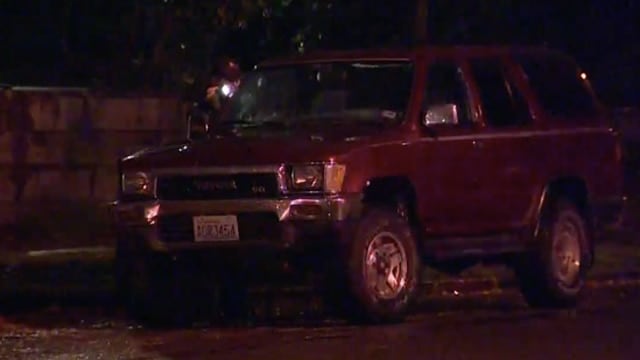 A man who ran over a 7-year-old child who was trick-or-treating on Halloween in Tacoma was held by a group of citizens – one of whom was armed with a gun – while they waited for police to arrive.

The young boy was with his father, crossing the street, when he was struck by the car. His father was brushed by the SUV, but not injured. Danielle Lester was with her husband, two children, and nephew when the accident occurred.

“I actually saw the little boy fly through the air. It sounded like somebody hit a garbage can,” Lester told The News Tribune.

Before anyone else could get there, Lester stepped in front of the vehicle to keep the driver from leaving.

“He was revving his engine and bumping against me,” she said, adding that she told the driver she wasn’t going anywhere.

Eventually, the driver stepped off of the gas, but then he “tried to bail,” according to Lester. But by that time, two others, including Kenneth Hines, who also witnessed the accident, were helping Lester to keep the man at bay.

Hines said he looked over when he heard tires screeching, followed by a thud.

“I saw candy going all over the place, and then another screech, and then a mother screaming, so I knew something had to be wrong,” Hines said.

Hines, who was armed with a gun, told reporters he “basically did a citizen’s arrest.”

When police arrived on the scene a short time later, Kasey Ryan Gunnarson, 38, was arrested. The boy was rushed to a children’s hospital in critical condition. He has a fractured skull, is missing teeth and his body is completely bruised from head to toe.

According to court documents, responding officers had reason to believe that Gunnarson was intoxicated at the time of the accident. Officers smelled alcohol and observed he had bloodshot eyes and slurred speech. Gunnarson initially told officers the child ran out in front of him. He later admitted that after work he was out drinking before he headed home and also smoked some marijuana. Toxicology tests were ordered the night he was arrested.

Gunnarson, who has a previous arrest for driving under the influence, was charged with vehicular assault, to which he pleaded not guilty.