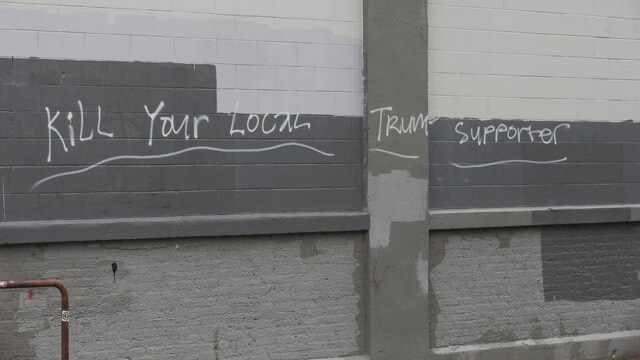 Sometime over the weekend, someone spray-painted a hate-filled message on the side of a building in Boston. The message is obviously anti-Trump, but even Clinton supporters say it’s too much.

In large white letters, spanning across about 20 feet, the words “Kill Your Local Trump Supporter” stood out at the School of the Museum of Fine Arts. It’s not known when exactly the vandalism went down, but Sam Lovett-Perkins, a 21-year-old nursing major at Northeastern University, noticed it early Sunday morning.

“I think it’s ridiculous. It’s violent and unnecessary,” said Lovett-Perkins, who is a registered Democrat and Clinton supporter. “I think it’s overkill on how we view each other as people. It’s outrageous where we’ve gotten to as a nation.”

Likewise, State Rep. Geoff Diehl said, “To actually advocate for killing someone is beyond the pale.”

Diehl also noted that he does not believe any form of voter intimidation or otherwise threats of violence will keep Trump supporters from the polls.

There are no suspects currently in custody, but the graffiti was painted over by late Sunday morning.