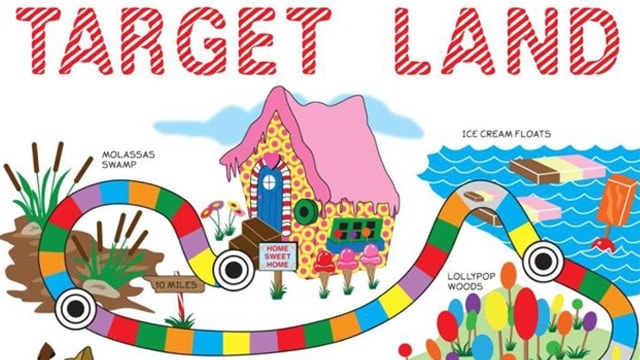 “Target Land” is the NRA’s take on the popular children’s board game “Candy Land.” (Photo: NRA)

The National Rifle Association has pulled a blog post encouraging members to print out pictures of popular board games and use them at target practice.

The blog post, which went up Wednesday, mentioned Hasbro’s “Candy Land,” and included downloadable PDF’s of the NRA’s adaptation: “Target Land.” On social media, the response was immediate, with people complaining that the NRA was marketing guns to kids. According to the New York Daily News, Hasbro issued a cease and desist letter, and the NRA’s blog post has since been removed.

“Board games are a great way to bond with friends and family,” read the since deleted post. “But have these timeless games you’ve grown up with, played time and time again, become a little, well, boring? Put a twist on your favorite games and head to the range!”

“The latest affront to American decency from the National Rifle Association (motto ‘Encouraging Kids to Fire High-Powered Handguns Since Even Before Columbine!’) comes in the form of ‘Target Land,’ a version of the childhood board game ‘Candy Land’ that could only come from the twisted, sick, deranged minds at the gun lobby,” wrote Gersh Kuntzman Friday in his column.

Kuntzman is better known to the gun crowd for writing an editorial about shooting an AR rifle, which he said felt “like a bazooka” and gave him PTSD, following the deadly Orlando nightclub shooting in June.

Earlier this year, the NRA posted a rewrite of the classic children’s tale “Little Red Riding Hood.” In their revised version, the young girl and her grandmother had guns. They also posted an adaptation for Hansel and Gretel, wherein the siblings were taught “how safely to use a gun and had been hunting with their parents most of their lives.