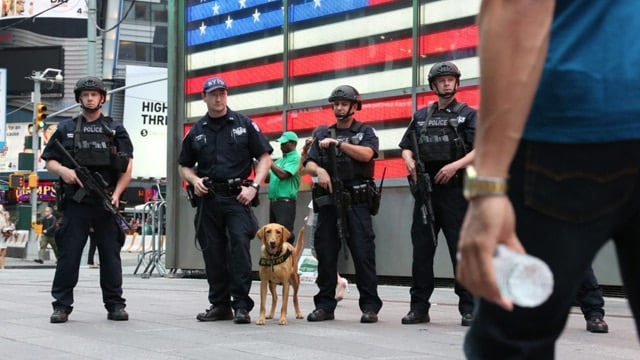 Security in New York City during the week of the presidential election. (Photo: NYPD)

New York City officials confirmed Monday in a press conference that the city will see a sizable increase in law enforcement as both Hillary Clinton and Donald Trump spend election night in The Big Apple.

Clinton’s campaign party will be at the Jacob K. Javits Convention Center, while Trump’s campaign will be across town at the Hilton Hotel. With both locations a mere two miles apart, several city blocks have been closed off.

Over 5,000 police officers – some with explosive-detection devices – will be stationed throughout the city, along with numerous federal officers and U.S. Secret Service. Mobile units will be on standby in case any incidents arise. In addition, every one of the city’s bomb-sniffing dogs will be on duty, along with special teams made up of roving officers. Authorities will also be stationed at the city’s more than 1,200 polling stations, Reuters reported.

NYPD Chief Carlos Gomez said it “is by far the largest election detail that the NYPD has ever had.” Gomez said it is comparable to the number of officers present on New Year’s Eve when the Pope visited. But it’s also the first time in more than 70 years that both presidential candidates will spend election night in New York City.

“We know that the eyes of the world will be on New York City,” Mayor Bill de Blasio said Monday. “We have an obligation, not only to the people in the city but to this country, to make sure that tomorrow, all through the day and particularly tomorrow night, go smoothly and goes well.”

Part of the beefed up security may be contributed to recent threats from ISIS and al Qaeda. The threats mentioned New York City, Texas, and Virginia, but the city’s top brass said the threat “lacks specificity.” Nonetheless, those threats, their credibility, and sourcing remain under investigation.

Both Clinton and Trump will watch election results Tuesday night, with one likely declaring a victory. Clinton previously had fireworks scheduled to be shot off over the Hudson River, but those have since been canceled, officials said.