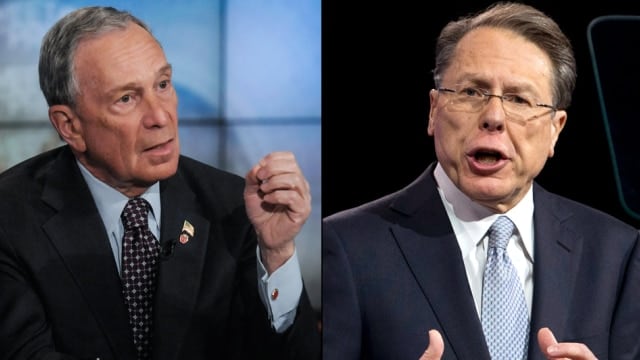 As the race nears the finish line, the 2016 election cycle has seen the very active participation of those on both sides of the issue of gun politics.

On the side of gun rights, the country’s largest pro-Second Amendment organization — the five million member National Rifle Association — has been the heavyweight champion in supporting its candidates.

Besides direct contributions to Republicans in the House and Senate totaling $847,000, the group’s various PACs and 501c committees spent $52 million on federal elections alone. The lion’s share of this spending — some $30 million — was in the presidential race in support of Donald Trump over Hillary Clinton. The bulk of the remainder in federal races went to a series of tight re-election battles aimed at keeping the Senate a Republican stronghold as a bulwark against future Supreme Court nominations.

The NRA has repeatedly driven home the specter of a Clinton-populated high court as the death of the Second Amendment, with Executive Director Wayne LaPierre saying as far back as the group’s annual meeting in Louisville in May.

“If she gets her hands on the Supreme Court and stacks it with just one more justice, every total gun ban she dreams, every confiscation scheme that she craves, will stand up in her court and we all will be kissing our Second Amendment freedom goodbye,” he said.

In addition to federal elections, the NRA has dropped an additional $7 million to fight state ballot initiatives in Nevada, Maine and California — bringing the group’s total spending this cycle to nearly $60 million.

Other pro-gun groups have splashed the pot this election cycle but have come nowhere near the NRA’s spending. The Colorado-based National Association for Gun Rights has contributed some $97,000 in congressional races while Gun Owners of America did the same to the tune of $57,000.

In support of anti-gun candidates, Everytown for Gun Safety’s PAC donated $172,825, mainly in the presidential campaign for which they have endorsed Hillary Clinton.

Everytown benefactor, former New York Mayor Michael Bloomberg’s personal PAC, Independence USA — to which he is the sole donor — spent at least $10.5 million. Further, he has made multi-million dollar donations to committees run by Planned Parenthood and WomenVote, groups that have pushed seven-figure sums to candidates such as New Hampshire Democrat Maggie Hassan who are running on gun control platforms.

As noted in data from the Nevada Secretary of State’s office, Bloomberg groups have also accounted for the bulk of a $19 million war chest in that state for a ballot measure on expanding background checks as well as a similar $3 million effort in Maine.

Politico reported this week that Bloomberg’s personal contributions alone have topped $65 billion so far in 2016, though it should be pointed out that not all are directed at gun control, as the media mogul has given heavily to support soda tax laws in several states.

Groups under the Everytown umbrella have also been active in grassroots efforts with Moms Demand Action noting Monday that, “volunteers in all 50 states have made 541,074 phone calls, knocked on 69,822 doors, and given 61,350 hours to supporting Gun Sense candidates and campaigns at the local, state and federal levels.”

For Everytown, as with the NRA, while they are backing an array of candidates across the country, the primary focus is on getting Clinton to the White House.

“Gun Sense Voters have a champion in Hillary Clinton,” said Everytown President John Feinblatt, in their only official candidate endorsement this year. “Our litmus test is simple: does a candidate side with the public or with the gun lobby? Hillary Clinton passes that test with flying colors – pushing back against the NRA’s extreme ‘guns for everyone, everywhere’ agenda, and ushering in a new political calculus that saving lives from gun violence is a winning issue.”

Other gun control organs have also dipped in their pockets, with former U.S. Rep. Gabby Giffords’ Americans for Responsible Solutions, spending $2.7 million in a series of tight House and Senate races.

Groups have been front and center in reaching the electorate this year on each side. Last week, CBS News ranked the top five political ads this election cycle, notably picking two with direct impact on gun politics to include Democrat Missouri Secretary of State Jason Kander’s spot in which he assembles an AR-15 blindfolded while talking about background checks in his run for the U.S. Senate and the NRA’s “Kristi’s Story,” about a woman who saved herself through a defensive gun use spun as a pro-Trump ad.

As for just what the expenditure of treasure and ad space will have accomplished, that is for the voters to decide Tuesday.