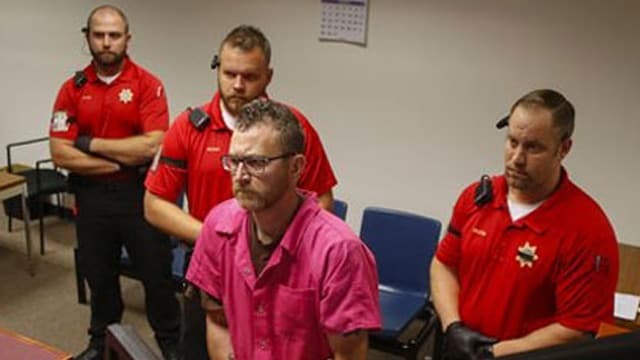 The Iowa man charged with killing two police officers last week couldn’t pay his bills and was found to be hitting his mother.

Scott Michael Greene, 46, was charged with two counts of first degree murder Thursday after police say he shot and killed two officers in ambush-style attacks in the Des Moines area. Just hours before the Nov. 1 attacks, a judge ordered Greene to move out of his mother’s house. District Judge Carla Schemmel ruled that Greene had physically hit and financially exploited his mother.

According to court records, Greene was unemployed and grew increasingly erratic and desperate for money in recent weeks. His mother, Patricia Greene, 66, filed for a restraining order on Oct. 19, a couple days after she was arrested for hitting her son. She wrote she believed her son was setting her up to get her in trouble.

Other court records show a credit union tried to collect $5,000 from Greene last year, but the debt was never paid and it grew to more than $10,000.

The two officers were killed just after 1 a.m. on Wednesday while they sat in their patrol cars two miles apart. Greene surrendered to police Wednesday morning and was admitted to a hospital for a pre-existing medical issue. After questioning, he was arrested Thursday and charged.

Greene’s bail is set at $10 million. If convicted, he faces an automatic life sentence without parole.