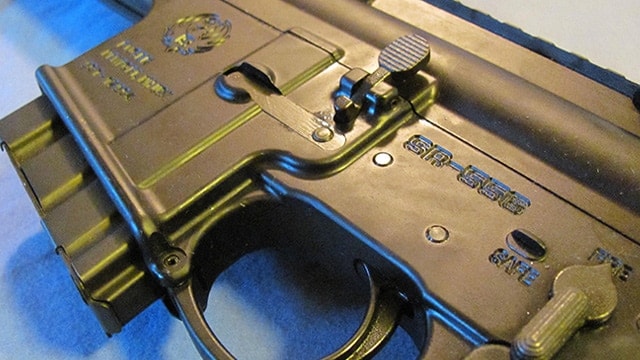 A side view of the economical Ruger SR-556E rifle that’s available in Canada. (Photo: Andy C/Guns.com)

With the election, recent stories of civil unrest, hunting season and the upcoming holidays, analysts wanted to know more about how well Sturm, Ruger & Company’s AR rifles are selling.

The Connecticut gun maker reported last week big profits for its third quarter and a more than $100 million boost in sales for the year. The company credited new guns, including the Ruger AR-556 rifle, for 32 percent of sales in the past nine months. But Ruger’s last quarter for the fiscal year — which this year will inherently be impacted by politics — typically includes the biggest sales as it covers deer season, Christmas and bleeds in and out of trade show season.

But, likely due to warm temperatures, “hunting season this year was a little softer than most people anticipated it might be,” said Christopher Killoy, Ruger’s soon-to-be chief executive officer. While that affected the sale of bolt-action rifles, the sale of AR rifles, as well as self-defense pistols, helped balance the quarter, he added.

“A lot of consumers are spending their discretionary income dollars on concealed carry products and modern sporting rifles,” Killoy said, adding that some versions of Ruger’s AR rifles are calibrated for deer hunting cartridges, such as .450 Bushmaster. He added, “We’re definitely seeing more hunters go with the modern sporting rifle category products.”

Despite making statements about the presidential election and the company’s dedication to candidates who preserve the Second Amendment during a conference call in August, Ruger’s senior managers declined to project how the election would affect sales. Yet, they provided color on the possibility of legal challenges to AR bans, such as actions taken by Massachusetts’ attorney general who decided over the summer to double down on enforcement efforts for the state’s assault weapons ban.

“Our trade association, the National Shooting Sports Foundation, is active in putting some litigation together with some Massachusetts retailers and we rely heavily in the NSSF to help us navigate some of those waters,” Killoy said.

In response to questions about politics influencing the sale of AR rifles, Ruger’s current CEO, Mike Fifer, stated what’s become obvious to industry insiders. “If you go back and look at historical numbers in the industry, you’ll find that those products that are most at risk from political fix are the ones that have the greatest volatility when the volume level of the politics increases, their sales skyrocket. And when it tapers off, those sales plummet,” Fifer said, adding “So, knowing that, you can make your own predictions.”

Although the company does not separate sales figures into consumer categories, Killoy gave insight into discussions Ruger has been having regarding likely contractual sales.

“We have some – we have done some law enforcement sales on the AR-556 because it hits a very attractive price point as great quality product,” he said. “But we’re also seeing interest on the precision rifle, the Ruger precision rifle as we’ve got (test and evaluation) samples out with several law enforcement agency and that seems to really have resonated with the LE community as well as our consumers.”

As for possible military sales: “Not that we’ve seen on the official side, we’ve had inquiries from quite a few folks in the special ops community that have bought them personally and take an interest in the gun. So, we know we’re making some inroads – surprisingly long-term inroads there as well,” Killoy said.