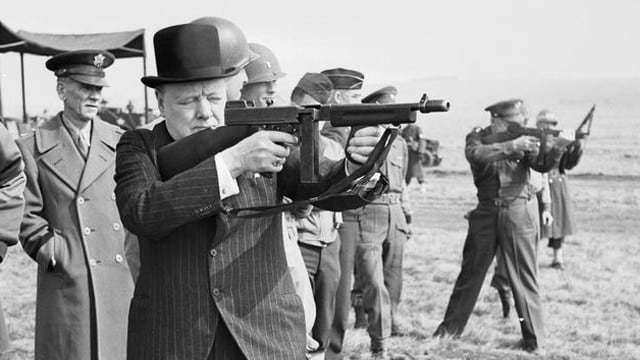 Winston Churchill chose to align himself with the United States as the countries worked to develop a standard ammunition for NATO, a move that some Brits back home opposed. (Photo: Cpt. Horton/British War Office)

Just a few years after the end of WWII, the United States and Britain were in the midst of a mini-arms race in an effort to determine what rifle and ammo would become the standard for NATO.

Coming off the great war, Winston Churchill wanted continued cooperation with the United States. His pragmatism on the issue made him butt heads with politicians at home, but ultimately paved the way for NATO’s standard.

In 1947, a panel of small arms experts in Britain chose a .280-inch projectile, a new intermediate ammunition that had half the recoil of the British military’s .303 round. The new .280 round led to the development of Britain’s EM-2, a rifle with a more compact design than traditional rifles.

Many in Britain wanted the EM-2 and the .280 round to become the NATO standard. But the American T65 ammunition got in the way. Developed from the U.S. military’s earlier .30-06 round, it had 40 percent more muzzle energy than the British .280.

British and American experts couldn’t agree on what the ammunition should be capable of in terms of range and accuracy. Tests in 1950 found that the .280 cartridge kept velocity better than the T65, but the T65 had better long range accuracy.

Churchill faced pressure from within his government to opt for the British made EM-2 and its associated ammunition. But Churchill’s party was more concerned with having a common supply chain with allies in North America so as to ensure Europe’s security in the future.

Churchill agreed to test both forms of ammunition, and did so. He liked the lighter recoil and accuracy of the EM-2, but insisted he was still willing to adopt the T65 in an effort to keep American engagement in NATO.

Eventually, despite his own experts’ assessments that it was an inferior design, Churchill went the way of the T65. The Brits chose the Belgian FN FAL as the standard rifle, and Germany, Austria and the Netherlands followed suit.

America developed the M14, and eventually the M16, and the T65 ammo became the NATO standard, and continues to be today.