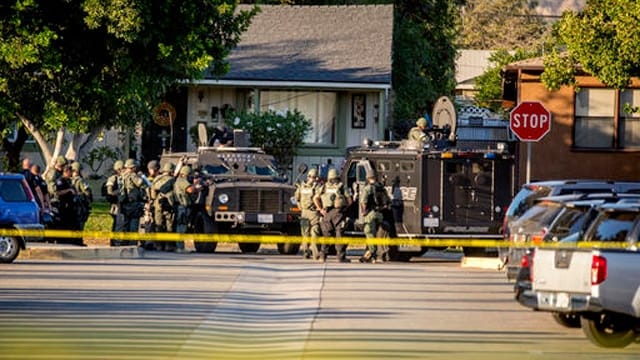 Heavily armed law enforcement respond to the scene where a shooting killed one and injured two others. (Photo: AP)

One man was killed and two women seriously injured after a man randomly opened fire near a polling station in Azusa, California, on Tuesday afternoon.

The incident unfolded around 2 p.m. and several voters heard the gunshots from inside the polling station. Authorities said the 45-year-old suspect, whose name has not been released, was shooting at cars and other passersby. Witnesses described the man as carrying two long guns and a handgun and dressed in military-style attire.

“According to witnesses he came out into the street with guns and just started shooting randomly at people and cars,” said Los Angeles County sheriff’s Lt. John Corina.

Police arrived on the scene after receiving multiple 911 calls, but were soon met by gunfire from the suspect. The officers then took cover and back up – including SWAT with armored vehicles – was called to the scene.

An exchange of gunfire continued to ensue, but the suspect was shot before he retreated back inside his home. After a several-hour standoff, authorities entered the home and found the suspect lying in the entryway. He was pronounced dead at the scene. None of the officers on the scene were injured.

A 77-year-old neighbor, as well as two women in their 50’s were struck by the suspect’s gunfire. One woman was driving a van and the other was walking down the street when they were shot. The neighbor apparently walked outside of his house when he heard the gunshots and was subsequently shot by the suspect. He died as a result of his injuries, and as of early Wednesday morning, the women – one shot in the face and the other shot in the torso – remain in critical condition.

Those close to the suspect, who was a military veteran, said he was using large amounts of cocaine and his habit had gotten increasingly worse in recent days. In fact, Corina said the man’s wife and two children left the home Monday “because he was getting out of control.”