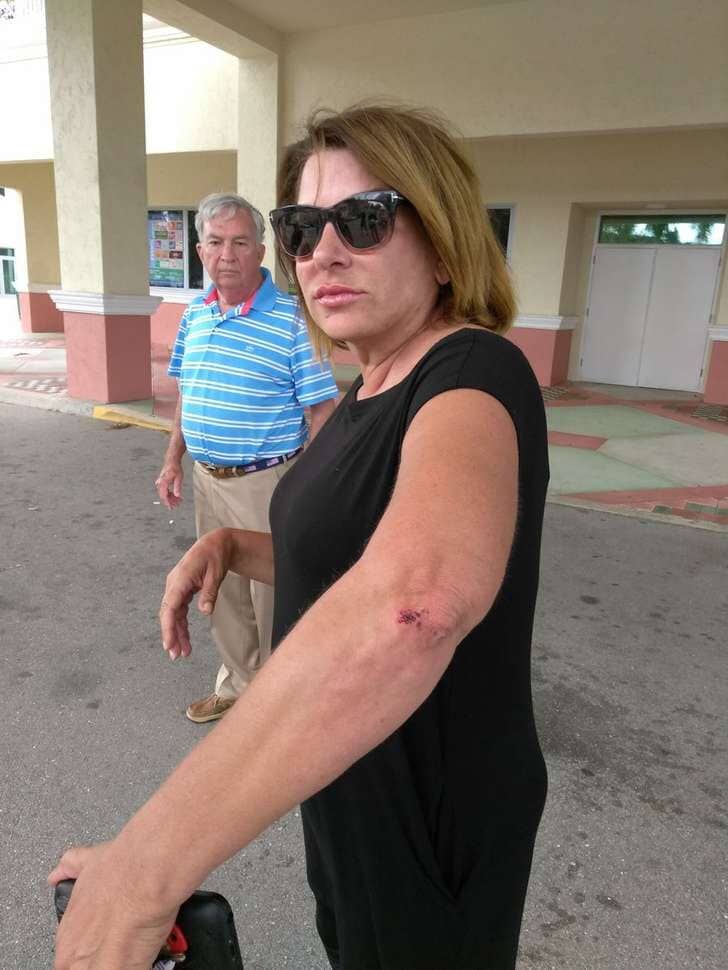 Donna Tatlici scraped her elbow and broke her watch during the altercation, but was otherwise uninjured. (Photo: Twitter)

When a verbal altercation between a man and a woman outside of a Jupiter, Florida, polling site Tuesday escalated to physical proportions, the woman doused the man with pepper spray.

Donna Tatlici was handing out Donald Trump literature outside of the Jupiter Community Center when voter Tom Garrecht passed her on his way inside and words were exchanged between the two.

“[He] walked up, and I said, ‘Republican down ballot,’ and he screamed at me, ‘I don’t need anyone to tell me who to vote for!’” Tatlici told the Palm Beach Post. “I said, ‘I’m not here to do that. I’m just here to give you the information.’”

Garrecht proceeded inside to vote, but when he returned a few minutes later, he and Tatlici exchanged words again. Only this time the altercation intensified to physical violence. Garrecht said as he was leaving he could hear Tatlici telling someone else that he was “a little man.” Garrecht said she also called him “a derogatory term” which he would not repeat.

Tatlici, who did not admit to calling the man any names, said the next thing she knew, Garrecht turned and “charged” at her. Tatlici said she warned Garrecht she had pepper spray, but he continued to come at her. At some point, Garrecht allegedly placed his hand on Tatlici’s shoulder, and at some time, she sprayed him with the pepper spray.

“At the point, I went after her and knocked everything out (of) her hands,” Garrecht said.

Tatlici said she was knocked to the ground by Garrecht, who started punching her.

Police were called to the scene, but neither Garrecht or Tatlici were arrested, though both admitted they could have handled themselves better. Tatlici said she’s “embarrassed” over the entire incident, but plans to press charges against Tatlici for assault.

“I believe that everybody has the right to vote and believe in,” said voter Annette Lumetta. “This is America. We happen by the grace of God. We have our opinion. It should never get to this.”