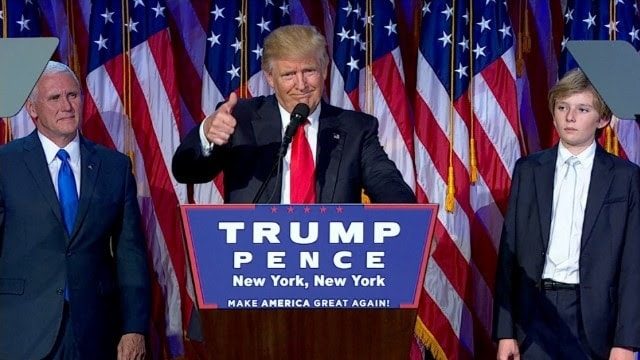 Donald Trump after winning the election.

With the Trump train soon to be taking a reserved spot at the White House, pro-gun groups say voters who elected Donald Trump as president sent the message that gun control is not a winning issue.

Months into his campaign, Trump turned gun rights into his first policy position while his opponent, former Secretary of State Hillary Clinton, adopted gun control. While it’s unclear if gun policy specifically drove voters in this election, many states forecasted to favor Clinton were pro-gun and in the end voted Trump.

“Trump’s victory repudiates the assertion by gun control advocates that the political calculus regarding the Second Amendment has changed,” said Chris Cox, director of the National Rifle Association’s lobbying arm, in a statement.

The NRA, one of the few well-known organizations to endorse Trump, spent more than $30 million on the presidential election, with more than half targeting Clinton in negative advertising.

“Voters sent a loud and clear message that our gun rights are not for sale,” Cox said. “NRA members and Second Amendment supporters rallied to elect a pro-gun president.”

“The American people have spoken. We have elected a president who has pledged to protect our Constitutional rights and a majority of both houses of Congress that will work to ensure that our individual right to keep and bear arms will be preserved,” the NSSF said in a statement.

In their statements, the organizations took jabs at groups that provided gun control policy ideas for Clinton’s platform, such as expanding background checks, assault weapons ban and overturning a federal law protecting the gun industry from criminal liability.

While gun control groups invested considerably less money in the presidential and other federal races than pro-gun groups, they expressed shock at the results, nonetheless. Political analysts, aggregating national and local surveys, gave Clinton a 71 percent chance of winning.

“We are stunned, disappointed, heartbroken over the national elections but make no mistake about it: we are in no way deterred from our goal,” said Julia Wyman, executive director for States United to Prevent Gun Violence, in an email statement to Guns.com.

On social media, Everytown for Gun Safety said: “Last night was tough. But we are tougher. And we must be, because even in the darkness there are points of light” and pointed to its success with ballot initiatives for gun control measures in Nevada, Washington and California.

Dan Gross, president of the Brady Campaign, also expressed disappointment with the results, saying the group is “disappointed that a candidate who ran his campaign on a message of hate, violence, intimidation, and fear will be the next President of the United States.”

Gross said the Brady group and its allies are prepared to work with Trump to prevent gun violence, but also prepared to take political action.

“Trump’s election isn’t the end of this fight. While Donald Trump may sit in the White House, he alone does not define this country’s future,” Gross said.