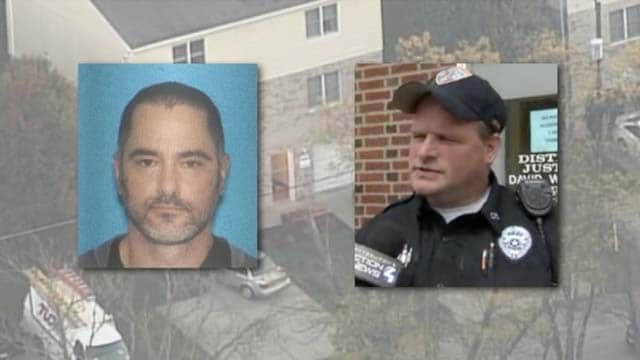 One officer is dead and another wounded after they were ambushed early Thursday morning in a town about 20 miles southwest of Pittsburgh.

The two Canonsburg police officers responded to a domestic disturbance call just after 3 a.m. Thursday, where they were immediately ambushed. Scott Leslie Bashioum, 52, died from gunshot wounds less than an hour later. The other officer is in stable condition as of Thursday morning after he underwent surgery.

Police spent several hours looking for the shooter, and at around 9 a.m. found a man and a woman dead dead inside a nearby duplex. KDKA in Pittsburgh is reporting that Michael Cwiklinski, 47, shot at police, and then shot a pregnant woman before turning the gun on himself. Both Cwiklinski and the woman died. She had a Protection From Abuse order against Cwiklinski.

Neighbors say it wasn’t the first time police had been called to the duplex. A criminal complaint from last November shows an assault charge against Cwiklinski.

District Judge David Mark lives in Canonsburg and told the Pittsburgh Post Gazette that he knew Bashioum and his family well. “He is a great guy, top to bottom. One of the best people I know inside and out,” he said. “I can’t imagine what the family is going through.”

A makeshift memorial is growing outside a municipal building in Canonsburg. Bashioum is the seventh police officer to die of gun violence in the last eight days.