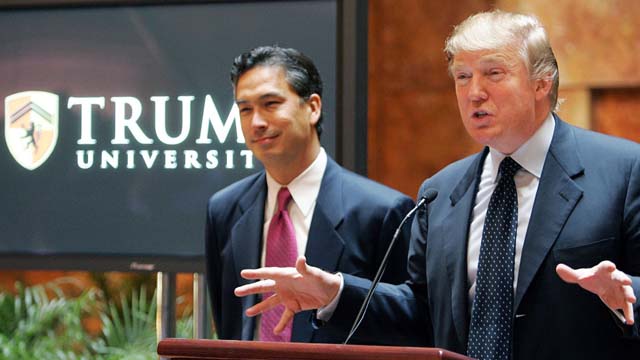 Before Inauguration Day, President-elect Donald Trump is scheduled to take the witness stand in a federal class action lawsuit that claims several customers of his Trump University were defrauded.

In San Diego Thursday, lawyers will argue whether Trump’s comments on the campaign trail can be heard by jurors during the trial, which is set for later this month. Trump frequently claimed that U.S. District Judge Gonzalo Curiel was unfit to preside over the Trump University case because Curiel is “Mexican,” and would be biased against Trump because of his plans to build a wall. Critics point out that Curiel is an American citizen and was born in Indiana.

Trump’s criticism of Curiel as well as anything else he said during the presidential campaign are at issue — including his tweets, his comments about women, his tax history, and a host of other controversial comments. Trump’s lawyer has signaled that he might try to further delay the trial, which was filed in 2010.

The suit alleges that Trump University gave seminars nationwide that promised to teach Trump’s “secrets” for real estate investment success. Marketing materials claimed instructors would be “hand picked” by Trump and customers paid as much as $35,000 for the courses.

Trump has admitted he didn’t hand pick any of the instructors, but has argued that the claim wasn’t supposed to be taken literally, as it was part of marketing language. Trump University, which isn’t an accredited school, did not deliver on its promise, according to the customers in the suit.

In May, Trump said he would attend the trial and take the stand. He’s already given two depositions in the case. He could avoid taking the stand, just two months before stepping into the Oval Office, by settling out of court.

Trump faces other legal battles. In New York, there’s an investigation into his charitable foundation. There’s also a reported federal investigation into whether his advisers have had ties to Russia. Trump has threatened to sue several women who are accusing him of sexual impropriety, and several of those women say they’ll countersue.

The Trump University suit is scheduled to start the Monday after Thanksgiving, Nov. 28.