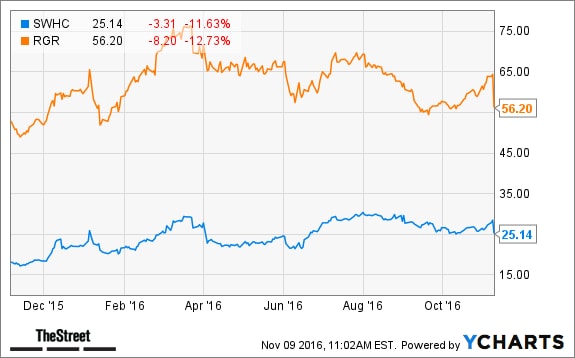 Vista Outdoors made out the best out of the three companies, with only a 3 percent drop. Sturm, Ruger & Company plunged 14 percent — the largest decrease the company’s seen since February 2014. In the most stunning decline, however, newly renamed Smith & Wesson closed out with a 15 percent plummet in shares.

Gun companies had been doing well up until Wednesday morning, riding high off fears of a Hillary Clinton presidency which was thought to yield tighter restrictions on guns. With a Trump win Second Amendment advocates breathed a sigh of relief as their gun rights remained intact; thus, the demand for firearms subsided.

“Typically the fear of such legislation prompts a near term surge in consumer demand for those types of firearms, as consumers flock to stores to stock up on such firearms before the ban is potentially enacted,” Wunderlich Securities Analyst Rommel Dionisio told TheStreet.

“Naturally with the Trump victory, such consumer fears would subside, so there will likely be no near-term demand surge any time soon for firearms,” he added.

Overall, the Dow soared 257 points Wednesday after experiencing a brief plunge in prices immediately following the Trump win. Analysts credit the president-elect’s measured and calming acceptance speech as the reason the Dow ultimately brushed up against lifetime highs.