Obama to Trump: ‘If you succeed, the country succeeds’ 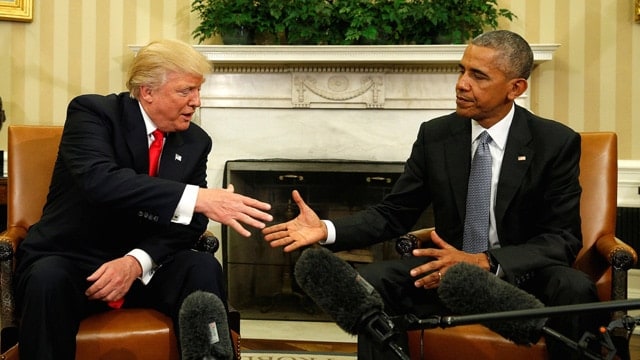 In a historical meeting Thursday between President Obama and President-elect Donald Trump, the two men appeared to both be able to set aside their personal feelings and beliefs long enough to engage in what Obama described as an “excellent conversation” aimed at working for the greater good of the country as a whole.

Throughout the presidential campaign, neither man has been less than vocal about his opposition of the other. Just days before American citizens chose Trump to be the 45th president, Obama, who previously endorsed Hillary Clinton’s bid for the presidency, said he believed Trump was “unfit” to be president. Likewise, Trump, with the candor for which he has become infamous, repeatedly displayed his contempt for Obama, even questioning the president’s citizenship and alleged ties to terrorist groups.

However, both men spoke with class Thursday afternoon as they addressed reporters after the meeting, which was scheduled to last only about 10 or 15 minutes, but instead went well into an hour and a half. Trump – who said, as far as he was concerned, the meeting could have carried on – called Obama a “very good man.” Likewise, Obama said his number one priority over the next two months is to “try to facilitate a transition that ensures our President-elect is successful.”

“If you succeed, the country succeeds,” Obama told Trump while reporters took note.

“I believe that it is important for all of us – regardless of party and regardless of political preferences – to now come together, work together to deal with the many challenges that we face,” Obama continued.

Obama’s demeanor Thursday echoed sentiments expressed the previous day, which CNN described as “a deliberate effort to counter Democrats’ crushing sense of doom at the prospect of four years of President Trump.”

“It is no secret that the President-elect and I have some pretty significant differences,” Obama said Wednesday during a press conference. “We are now all rooting for his success in uniting and leading the country.”

Trump expressed respect toward Obama, called it a great honor to speak with him and said he would seek Obama’s counsel in the future.

“We want to make sure that they feel welcome as they prepare to make this transition,” Obama said in reference to the Trump family, who will be moving into the White House in January.