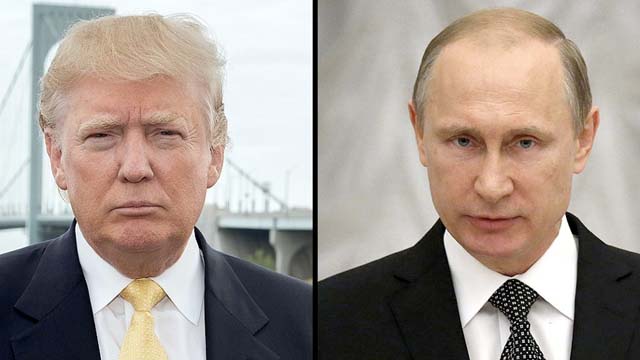 On the campaign trail, Trump repeatedly denied that he or his team had any contact with the Russians. And a Trump spokeswoman told the Washington Post there was no contact between Trump’s people and Russia before Tuesday’s election.

But Sergei Ryabkov, a senior Russian diplomat, told the state-run Interfax news agency that Russia had contacts with Trump’s team.

“Obviously, we know most of the people from his entourage,” Ryabkov said. “I cannot say that all of them, but quite a few have been staying in touch with Russian representatives.”

According to the New York Times, the Foreign Ministry in Moscow clarified that Ryabkov was referring to politicians and Trump supporters, and not people inside Trump’s immediate campaign camp.

It’s not uncommon for presidential candidates to meet with foreign heads of state. Trump met with Enrique Pena Nieto during the campaign and both he and Hillary Clinton met with Benjamin Netanyahu of Israel.

Still, Russia has been accused of trying to interfere with the 2016 election. The Obama administration said in October that Russia ordered a computer hack of Democratic National Committee emails that were released by Wikileaks. Law enforcement didn’t find any evidence of Trump colluding with Russia.  But Trump openly called on Russia to help find missing Clinton emails.

“Russia, if you’re listening, I hope you’re able to find the 30,000 emails that are missing,” Trump said at a rally during the campaign. Trump later said he was being sarcastic.

Russian President Vladimir Putin congratulated Trump on his victory Wednesday, saying he hopes to work with Trump to lift Russian-US relations out of the current crisis.