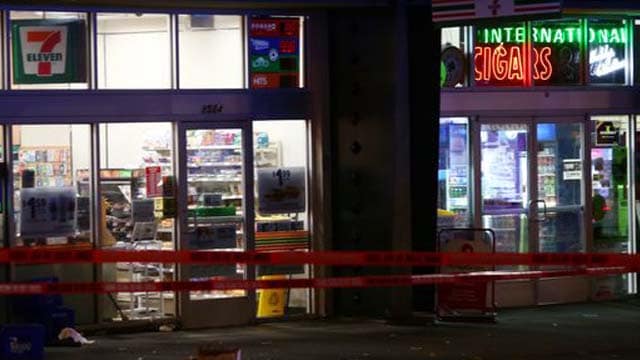 Police are still looking for a shooter after five people were shot in downtown Seattle, an incident unrelated to a nearby anti-Trump rally.

Witnesses say it started with an argument outside a convenience store around 7 p.m. on Wednesday. The gunman walked away from the group, turned around and fired at them before fleeing on foot. Seattle Police stressed that it was a personal argument unrelated to the protests.

The manager of the convenience store, Sharon Keith, told the Seattle Times she heard what “sounded like firecrackers” and she told everyone to get down before locking the doors. “I saw multiple people down, bleeding,” she said.

Andy Wittenberg was shopping nearby when people ran into the store and told him to take cover. “I’ve lived in major cities for a while. I’ve never seen anything close to this,” he told ABC10 in Seattle. “This is the worst incident I’ve ever seen.”

A heavy police presence was already in the area for the rally, and emergency crews responded to the scene within a minute. Seattle Police say several of the victims were innocent bystanders, and were not involved in the argument that led to the shooting.

Two of the victims were in critical condition, but are improving. Two other victims are in stable condition as of Thursday morning, and another victim was released from the hospital. They range in age from their 20’s to their 50’s.

Police say the shooter is an adult male, but provided no other details. They are reviewing surveillance video in the area and investigating the incident.