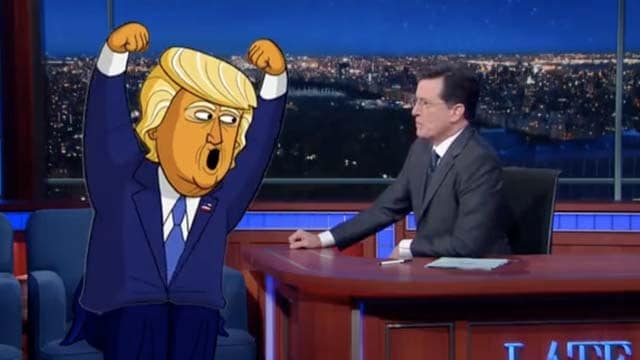 Late night talk show hosts have been roasting American presidents for decades, but the tone in the wake of Donald Trump’s Tuesday night victory came from a somber place for most hosts.

Conan O’Brien opened his monologue on TBS’s “Conan” Wednesday night by asking if anyone needed a hug.

“We have been here before. We have had bitter, angry elections for 200 years. Whether it was Jefferson vs. Burr, Adams vs. Jackson, Lincoln vs. Douglas, Alien vs. Predator,” he said, as the audience laughed. “I threw that in, I’m trying to keep it light. The point is, this is our thing, okay? And the optimist in me chooses today to be happy that we have fair and free elections at all. I think it’s an amazing thing, I really do.”

While O’Brien was offering hugs, CBS “Late Show” host Stephen Colbert needed one. “I am so glad to be with you tonight,” he said. “I wouldn’t want to be alone right now.”

“This is what it feels like when America’s made great again. I was wondering and I was really hoping it would feel better ’cause this sucks,” said Colbert.

On CBS’s “Late Late Show,” host James Corden, who is British, offered Americans his take on the Trump victory.

“(America) is a country of opportunity, and diversity and hope,” said Corden. “This is still the land of liberty. It put people on the moon. It’s the Chicago Cubs, Michael Jordan. It’s the land of tacos, and yes, and yes, tacos are Mexican, but that doesn’t mean they don’t belong here.”

“This country isn’t about one election result,” he said. “This country is about the people who live here. It’s you. It’s how you treat one another. It’s the tone you set that will define who we are.”

On ABC’s “Jimmy Kimmel Live,” host Kimmel quipped about whether Trump even wanted to win.

“It was a big surprise,” said Kimmel. “I think it was even a big surprise to Donald Trump. Did you see his victory speech?  He didn’t want this. He wanted to win — but he doesn’t actually want to be President. … His plan was to go home to Mar-a-Lago, play 5,000 rounds of golf, phone in to Trump TV every morning for 10 years and then die on the toilet!”

Kimmel also walked voters through the five stages of grief, which ended with acceptance. “No matter how you feel about it, Donald Trump is the president of the United States of America, so thank God we legalized marijuana yesterday.”

“No matter how you feel about it, Donald Trump is the president of the United States of America, so thank God we legalized marijuana yesterday,” Kimmel said, referring to the California measure passed by voters to legalize the recreational use of the drug.

Several other talk show hosts weighed in on Trump, and they’ll have the next four years to continue weighing in.