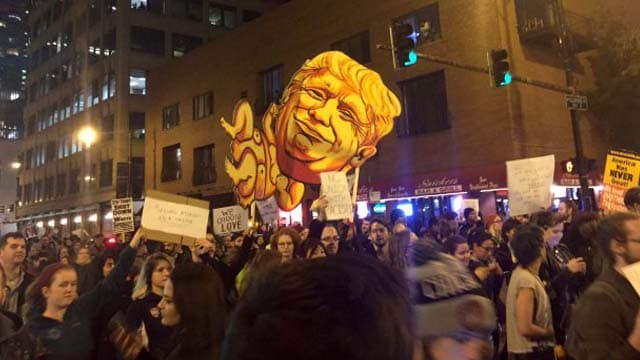 Thousands of people protested Donald Trump’s victory Wednesday night by clogging the streets near his namesake tower in Chicago.

The protests come after a contentious campaign that had many worried about post-election unrest. The daylong demonstrations were largely peaceful, but crowds did shut down portions of Lake Shore Drive for about a half hour, others climbed on top of a CTA bus and helicopter footage showed at least one man lighting what appeared to be a flag on fire.

Hundreds of people blocked the entrance to Trump Tower, according to the Chicago Tribune. “No Trump, No KKK, No Fascists USA,” was a popular chant.

“We’re here preaching love even though we hate this man,” a protester at the rally told DNA Info Chicago.

Anthony Moreira is a Trump supporter. He stood in front of Trump Tower, waved an American flag and yelled at the anti-Trump crowd. “You’re weak,” he yelled. “That’s why you lost.”

“Trump isn’t a bigot,” Moreira told the Tribune. “If you look behind the back doors you’ll see blacks, Hispanics, Muslims and all kinds of people working for him.”