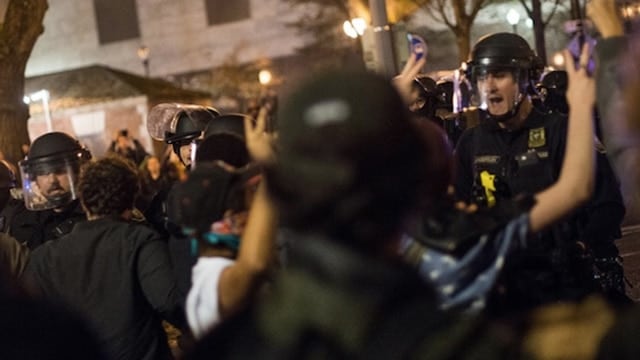 As anti-Trump protests continued across the country for the second night in a row, police in Portland declared riots in the city as protests went from peaceful and lawful to violent and destructive.

“Due to extensive criminal and dangerous behavior, protest is now considered a riot. Crowd has been advised,” the Portland Police Department announced via Twitter at 8:30 p.m.

The department issued numerous warnings informing the public that the Pearl District protest had turned into unlawful actions and that those wishing to peacefully exercise their right to free speech should remove themselves from the unlawful assembly. Police suggested lawful protesters gather at Pioneer Square and warned that staying with the illegal protesters could result in injury, arrest or both. Police also advised that participating in a riot is a Class C felony. 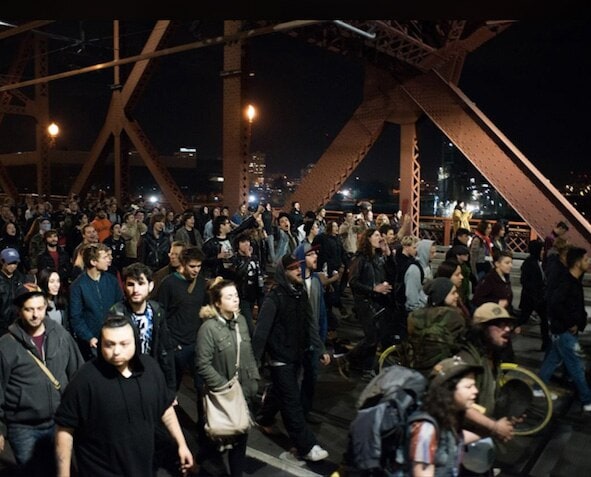 Police advised protesters that blocking a roadway is an illegal action. (Photo: KATU)

“They’ve created an incredibly unsafe and tumultuous arguments,” Pete Simpson with Portland Police said of the rioters. “We also know there are people in that crowd that want nothing to do with them and tried to stop them unsuccessfully.”

Gregory McKelvey, who organized the march and is part of a new movement called Portland’s Resistance, told the Portland Patch that they were the ones trying to stop the violence. McKelvey said once the protest turned violent, he announced he was going home and did not want to be involved in destruction and vandalism.

“These are different people,” he said, referring to the protesters who turned violent. “They are not involved with us, having nothing to do with us. They were going to be there doing their own thing. They don’t care about anyone or what we are protesting.

“This is not who we are,” he continued. “We are about love. What they are doing is just as bad as Trump, spreading hate and violence.”

Likewise, the group announced on their Facebook page that they would not participate in the violent acts. “Our group is reconvening at pioneer courthouse square,” the group wrote. “We are not part of the violent protest. We encourage anyone who has been caught up in the riot to come abandon those individuals and join us at pioneer courthouse square for a debriefing.”

Meanwhile, local businesses were vandalized by rioters breaking windows and spray painting graffiti, which consisted mostly anti-Trump messages. Vehicles at a car lot were damaged and there were reports of rioters taking to the streets and attacking random drivers, whose vehicles were also damaged. Police said some suspects were seen carrying bats, while rocks and other objects were being hurled at law enforcement officers attempting to keep the peace. 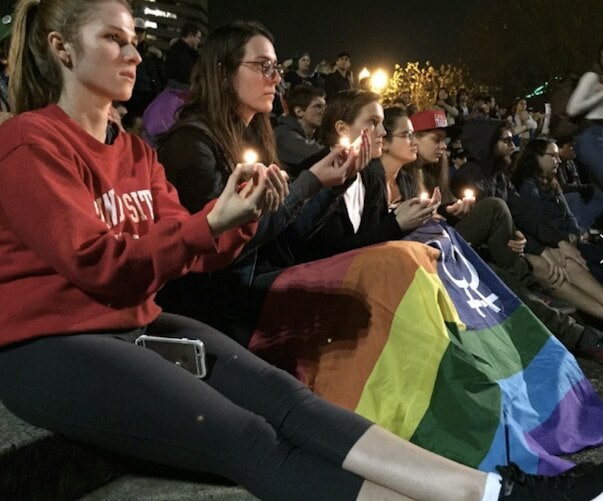 But neither peaceful protests or riots were limited to Portland. From coast to coast, angry protesters took to the streets to express their discord over Trump’s victory.

While Trump has been busy the last two days preparing for his transition into the White House, the president-elect took time to send out a tweet expressing disappointment in the destruction occurring across the country.

Trump’s tweet was riddled with negative reactions, while Trump supporters noted that those inciting riots and participating in protests are not respecting the democratic process of the United States.