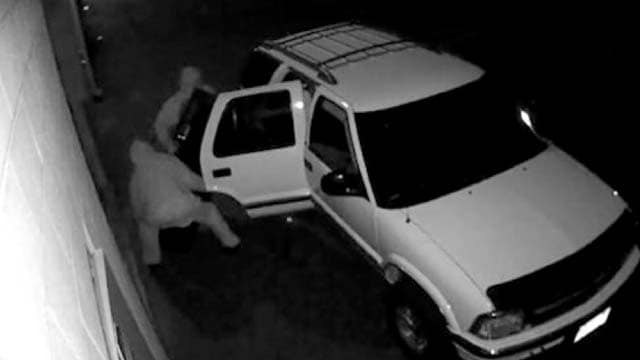 This surveillance video screengrab shows the two burglars loading stolen goods into a white SUV on the morning of Nov. 5. (Photo: Flawless Firearms)

According to the ATF, the masked men broke into Flawless Firearms in West Jordan, Utah around 7 a.m. on Nov. 5. The thieves took the two machine guns, as well as two silencers and some checks — all of which were in a safe. Surveillance video captured the pair loading the stolen goods into a white SUV.

“The theft of machine guns is especially concerning,” said ATF Denver Field Division Special Agent in Charge Ken Croke. “These types of weapons are extremely dangerous in criminal hands as they can fire several rounds with a single pull of the trigger.”

“It is a threat to the safety of our community,” said West Jordan Police Chief Doug Diamond.

Stealing and possessing stolen guns from a federally licensed dealer is a federal crime and carries a punishment of up to 10 years in prison. The ATF is offering a $10,000 reward for information that leads to an arrest of the burglars.

In October, at least two men stole more than two dozen handguns from a pawn shop about 25 miles north of Flawless Firearms. The men were covered head to toe and had several tools with them as they broke in. The ATF says despite the similarities, they don’t believe the two burglaries are related, though they noted it’s too early to definitely rule out a connection.