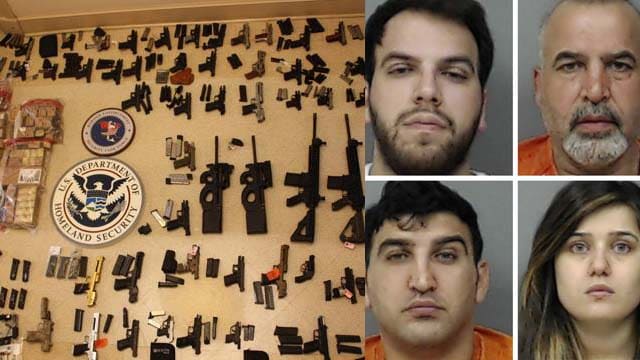 An Iowa man has been sentenced to 28 and a half years in federal prison for trying to send hundreds of guns to Lebanon.

Herz, of Cedar Rapids, and three co-conspirators — all family members — were arrested in May 2015 after a federal firearms dealer tipped off authorities. The group had been buying scores of guns and ammunition, a move that prompted the dealer to speak up.

All four of them pleaded guilty to an array of gun smuggling charges. According to court documents, the group sent three containers to Beirut — all of them with guns concealed with other goods. Authorities recovered two of the three containers. Among the hundreds of guns shipped, 30 of them were military-style rifles.

Herz’s son, Adam Al Herz, was sentenced earlier in October to 20 years in prison. Sarah Majid Zeaiter, Al Herz’s sister in law, was sentenced to seven years, and Bassem Afif Herz, Zeaiter’s husband is scheduled to be sentenced this month.

Evidence presented during the case showed that the guns could have been sold in Hezbollah-controlled southern Lebanon, where Al Herz has a home, for nearly ten times their value in America. According to investigators, the group bought more than $100,000 worth of guns, and may have bought more.

“These defendants were bold and brazen gun traffickers,” said Kevin W. Techau, U.S. Attorney for the Northern District of Iowa. “They knew they were violating U.S. laws enacted to prevent smuggling to foreign countries. Stopping the illegal flow of weapons, weapons parts, and ammunition is a key priority for law enforcement.”