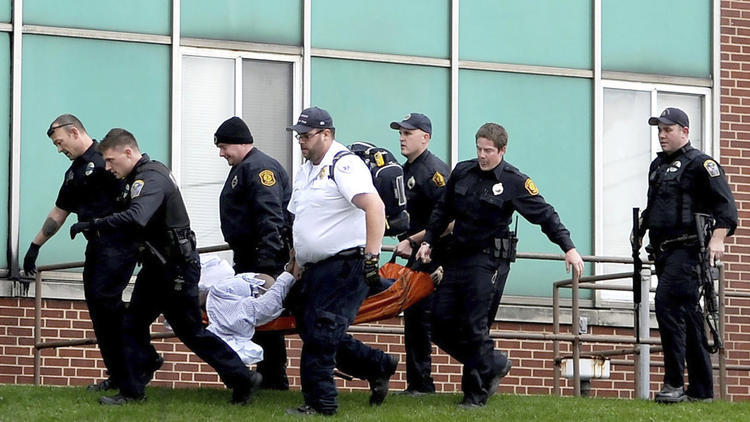 Emergency responders transport a stabbing victim to a nearby ambulance after a Pennsylvania man went on a stabbing spree inside a mental health facility. (Photo: Pam Panchak/ AP)

A Pennsylvania man stabbed six people inside a mental health facility before he was shot by police and taken into custody.

The incident occurred Friday afternoon at the Turtle Creek Valley Mental Health facility in Munhall. Allegheny County police said officers were called to the facility after receiving a call regarding a stabbing and sexual assault. Police were dispatched and upon arriving enounctemed multiple people fleeing the building.

Police say Dustin Johnson, 38, was found on the fifth floor of the building armed with two kitchen knifes and a BB gun without markings.

“The urgency escalated as the situation went on, at one point the actor continued to brandish weapons, we knew we had to get the victims to medical aid,” Allegheny County police Superintendent Coleman McDonough said, which prompted SWAT officers to engage Johnson.

Shots were fired around 3:13 p.m. Johnson was hit, but survived. He was taken to a local hospital and underwent surgery where he is currently recovering.

Though several people were injured, there were no fatalities reported. Two residents of the facility and three employees  were taken to nearby medical centers for treatment. Four are expected to recover, however, one is listed in critical condition.

Cherrell Fulton, resident adviser at the facility, was in her fifth floor office when Johnson, a former patient, entered.

“I knew something wasn’t right,” Fulton told The Pittsburgh Post-Gazette.

Fulton attempted to calm an agitated Johnson but he pulled a gun, later identified as a BB gun, from his pocket and launched into a tirade.

“He kept repeating, ‘You ruined my life!’” Fulton said.

The adviser dove under her desk as Johnson attacked three of her colleagues. Fulton said she remained under her desk until he left. At that point she ran to the door and locked it, barricading herself inside the office.

Johnson was described by one employee as friendly and nice despite patients painting him as an angry man frustrated because his insurance no longer covered mental health treatment at Turtle Creek.