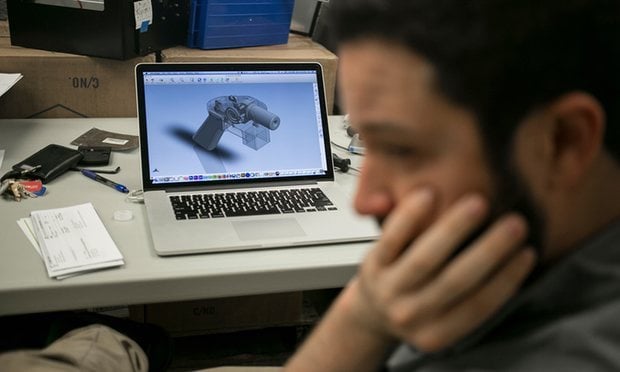 The design files, downloaded over 100,000 times, were ultimately ordered to be removed from the internet by the State Department. (Photo: Ilana Panich-Linsman/New York Times)

Defense Distributed may have lost its lawsuit in federal court in September but the Texas-based 3-D gun printing giant isn’t done fighting just yet.

In the petition for a rehearing en blanc Defense Distributed, bolstered by the Second Amendment Foundation, moved to have its case re-examined, arguing the Fifth Circuit’s decision disregards precedents set by the circuit court as well as the U.S. Supreme Court.

“If the court is unprepared to do away with preliminary injunctions to secure the right of free speech, it should conform its decisional law to the Supreme Court’s requirements and adopt the standards applied in the other circuits. Rehearing en banc should be granted,” the groups maintained.

No decision has been granted on the matter, but this latest development is one in a long list of battles Defense Distributed has fought against the U.S. government.

Wilson has been embroiled with the State Department for the past three years, filing suit after the feds demanded he pull plans for the first plastic printed pistol, the Liberator, from his website.

Wilson did eventually pull the files. However, by that time, the design had already been distributed across file sharing sites like The Pirate Bay. By Wilson’s account, his blueprints have been downloaded more than 100,000 times.

Not to be silenced, Wilson threw up a metaphorical middle finger to the U.S. government and filed suit. Alleging First Amendment infringement, his company alongside the SAF rallied against the U.S. government’s claims that the data was harmful to national security and violated the International Traffic in Arms Regulation.

“I’m going directly to the root and saying, ‘Look we have to invalidate ITAR. It’s clearly an unconstitutional grab against our fundamental liberties,’” Wilson told Guns.com in an interview in September. “We have to sue these people if we care about the language and the core text of our movement being preserved on the internet.”

The case wove its way through the lower courts before landing in the Fifth Circuit Court. Making a fervent plea for First Amendment rights, Defense Distributed and the SAF asked the panel of justices to overturn the previous court’s decision and allow unimpeded data distribution.

In a 3-1 ruling just days ahead of Wilson’s scheduled talk at the Gun Rights Policy Conference, the Fifth Circuit Court ruled against Defense Distributed.

“The crux of the district court’s decision is essentially its finding that the government’s exceptionally strong interest in national defense and national security outweighs Plaintiffs-Appellants’ very strong constitutional rights under these circumstances,” the ruling said.

“The fact that national security might be permanently harmed while Plaintiffs-Appellants’ constitutional rights might be temporarily harmed strongly supports our conclusion that the district court did not abuse its discretion in weighing the balance in favor of national defense and national security,” the ruling continued.

Though disappointed, Wilson said the war is not yet lost. Vowing to continue the fight, he passionately implored gun owners to stand behind him and his unique fight for 3-D gun rights.

“We are so in peril,” he said. “Our culture is being claimed by this government, being owned by this government. Please give me your help or your friendship. Please keep us in your thoughts. We are trying to win, but it’s very, very difficult. I don’t know where it’s going to go. I’m very worried that there’s going to be a permanent claim on the intellectual property of our guns by the federal government and I don’t know how to resolve it, but I promise you I will run it to the ground.”