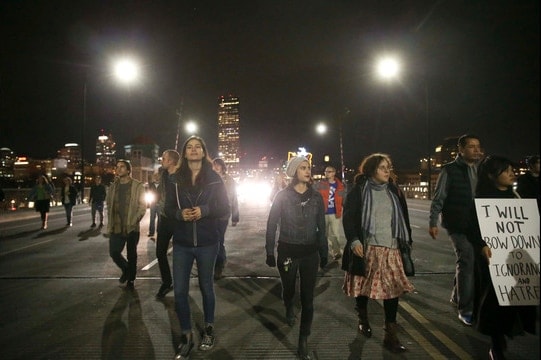 Portland police arrested two men after they allegedly shot a protestor during an anti-Trump rally in the city early Saturday morning.

Steffon Marquise Corothers and Shamar Xavier Hunter were charged with attempted murder and unlawful use of a weapon after the two used a Tec-9 pistol against a protestor during an early morning demonstration.

The protestor was taken to the hospital with minor injuries and is expected to recover.

The incident happened after a week of civil unrest stirred by Tuesday’s presidential elections that revealed Donald Trump as the 45th president.

Hundreds took to the streets in Portland, disrupting traffic and spray-painting graffiti, marching against the new President-elect.Organizers for the event had called for a peaceful gathering, but the mood shifted late Friday night into Saturday morning. Police tried to contain the mob, using tear gas as protestors threw “burning projectiles” and vandalized property.

Though largely peaceful, rallies all over the U.S. have seen their fair share of sporadic violence and vandalism as Americans grapple with an impending Trump presidency.

Roughly 3,000 people gathered in Los Angeles early Saturday for a peaceful protest. That rally resulted in 200 arrests for failure to disperse after police broke up a demonstration. Hundreds of anti-Trump advocates banded together in Manhattan, New York in a so-called “love rally.”

“I don’t want to live in a country where my friends aren’t included, and my friends are fearful, and my children are going to grow up in a world that’s frightening, and my granddaughters can look forward to being excluded from jobs and politics and fulfilling their potential, so I’m here for them,” website developed Leslie Holmes told the Associated Press on her way to the rally.

Demonstrations also took place on an international level as allies become more nervous about Trump’s foreign policy. About 300 people protested the election results outside the U.S. Embassy in Berlin.

President Barack Obama will meet with Chancellor Angela Merkel as well as other European leaders in Berlin next week and is expected to allay Trump presidency fears.