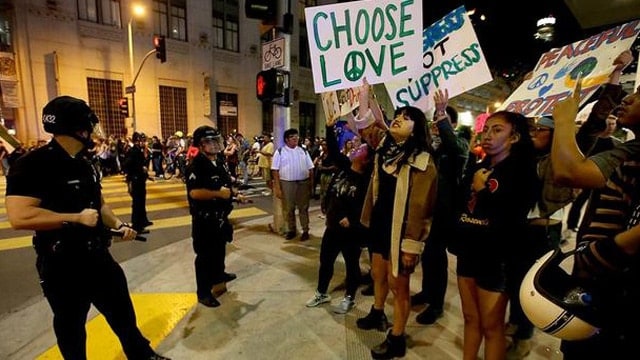 A police officer working undercover was assaulted by at least two suspects who were part of an Anti-Trump protest that went late Thursday night into Friday morning. After the assault, the officer realized his gun had also been stolen.

While demonstrations were being held downtown to show disdain for the results of last week’s presidential election, three undercover officers were given the task of protecting the Los Angeles Police Department headquarters building from vandalism and other possible damage. Around 10:30 p.m., the officers noticed about 20 people break away from the other, larger group of protesters and make their way toward the back of the building.

When a male suspect started spray painting near the building, the officers went to make an arrest, but a woman confronted one of the officers, grabbed the handcuffs out of his hands and hit him in the head several times with the handcuffs. During the scuffle, at least one other individual punched the officer, who was not seriously injured, an official, who did not have permission to discuss the case but chose to speak on the condition of anonymity, told the Los Angeles Times.

The woman who stole the handcuffs was identified as Natalie Araujo. She was arrested and booked on suspicion of assault with a deadly weapon after she was taken to the hospital for unknown injuries.

Officer Tony Im, with the LAPD, said neither the gun or the handcuffs have been recovered, but authorities would like to see them returned.

After initially resisting, the man responsible for the spray painting, Jorge Suarez, was arrested.

But the arrests were just a sliver of the nearly 200 that were made that night in Los Angeles. The LAPD confirmed in a news release 187 adults and eight juveniles were arrested on various charges.

“LAPD officers from throughout the City worked diligently to facilitate the demonstrators constitutionally guaranteed right to peacefully demonstrate while ensuring a safe environment for everyone,” the release stated.

The arrests came after the demonstrations turned violent and destructive, with protesters vandalizing property, blocking main roads, assaulting individuals and interfering with officers. The department said those who were arrested refused to follow officers’ commands to leave the area once the conditions at the demonstration became unsafe.

The Los Angeles Police Protective League, which represents LAPD officers, criticized the department’s top officials in a statement, citing a lack of action and preparedness. The League called Wednesday night’s protests a “pathetic example of political correctness undermining the public’s safety,” and questioned why the protests were allowed to carry on as they became an unsafe environment for both the officers trying to keep order and innocent bystanders.

“They had no plan of action and failed to act,” the League said of the top brass, also noting that social media was abuzz of the demonstrations to come before they ever even happened. “Officers on the street last night were overwhelmed and calling for backup, freeways were shut down, fires were started and angry crowds grew larger and larger. It was a powder keg waiting for a match.”

The statement made a correlation between the current events and the L.A. riots in 1992, which they say started in the same manner. The statement concluded by noting “either LAPD command staff were outsmarted, outplanned and outmaneuvered by a cadre of professional protesters or LAPD command staff were too timid to act to protect officers and the safety of Los Angeles residents because it would be considered politically incorrect to do the right thing.”