At $800K a pop, new Navy destroyer's ammo is in question 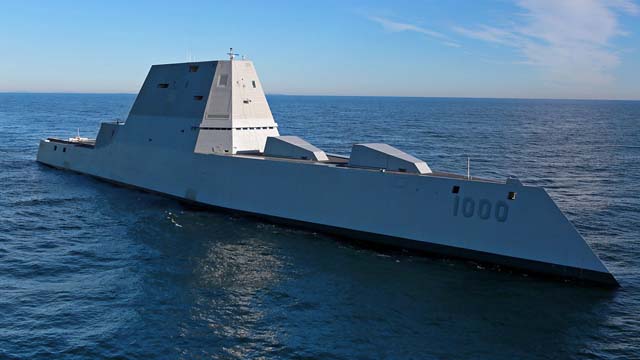 The USS Zumwalt’s new gun system was supposed to be a cost effective means of hitting targets 70 miles out, but it’s proven to be anything but. (Photo: U.S. Navy)

Expensive ammo might become a problem for a new gun on the Navy’s most advanced destroyer.

At $800,000 a piece, the Navy has spent $72 million on 90 projectiles for a GPS-guided, 155mm gun system aboard the USS Zumwalt. The new projectiles were supposed to be a cost effective means of hitting targets 70 miles away. But for just $200,000 more each, a cruise missile can take out targets 1,000 miles away.

“Congress is going to want to know how the Navy could get so far down the road without realizing that the price tag on these projectiles is so high,” Loren Thompson told the Associated Press. Thompson is a defense analyst at the Lexington Institute in Arlington, Virginia.

For now, the Navy has no plans to purchase more than the initial 90 projectiles. They’re trying to figure out other, less expensive ammunition options.

Lockheed Martin, which developed the ammo, blames the low number of ships for driving up costs. As many as 32 of the ships were set to be built. Now the Navy might just buy two of them.

Budget limits have forced the Navy to drive down costs. But President-elect Donald Trump has vowed to boost defense spending, something that could help curb the Navy’s ammo problem.

The Zumwalt is a 610-foot ship that weighs 15,000 tons. It was commissioned last month and is on its way to its home port in San Diego.