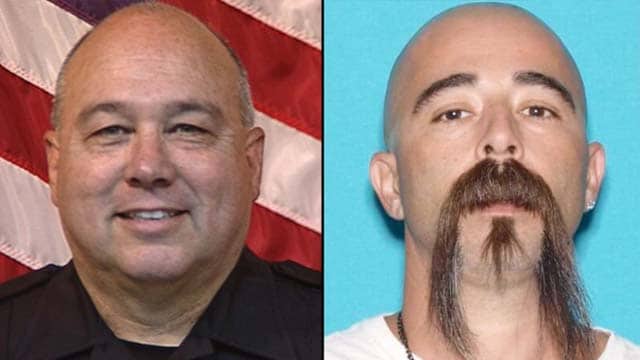 A Central California sheriff says his deputy was executed early Sunday morning, prompting an hours-long manhunt that led to the suspected killer’s arrest.

Police say the suspect, David Machado, 36, shot Stanislaus County Sheriff’s Deputy Dennis Wallace, 53, twice in the head just after 8 a.m. Sunday. Wallace was radioing in a stolen car “and then everything went silent,” according to Sheriff Adam Christianson. Officers arrived at the scene to find Wallace dead. Machado was arrested four hours later.

Police say Wallace didn’t even have a chance to get his gun out because it happened so fast. Machado is suspected of carjacking someone after shooting Wallace. He was wanted for previous felony criminal activity.

“I will do anything in my power to make sure he ends up on death row,” said Christianson.

Wallace was a 20-year veteran of the Stanislaus County Sheriff’s Department. He leaves behind a wife and children. His brother, Modesto Police Officer David Wallace, said he and Dennis were proud to work in law enforcement, following in their father’s footsteps.