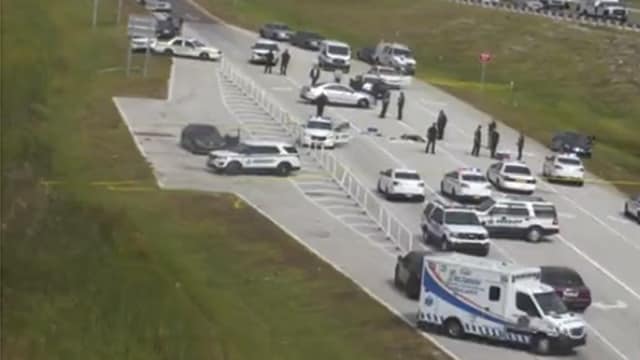 The high-speed chase and subsequent shooting left the freeway shut down for more than nine hours. (Photo: Winks)

A man who was armed with a handgun stopped a Lee County Sheriff’s deputy from being beaten by a suspect after a high-speed chase on a busy highway in Estero, Florida, Monday morning.

The incident unfolded around 9:30 a.m. when Deputy Dean Bardes was working an accident on the highway and the suspect’s vehicle flew by him at a high rate of speed. The suspect, who was driving a blue Toyota sedan, drove on the left shoulder of the highway and reached speeds well over 100 miles per hour, multiple witnesses estimated.

Bardes pursued the suspect, but at some point, both vehicles stopped. The suspect, whose name has not been released, exited his vehicle and approached Barde’s patrol car. Kimberly Jenkinson, who witnessed the incident, said at that point the suspect pulled Bardes from his patrol car, slammed him to the ground violently, and began beating him.

“It was just awful,” Jenkinson told reporters, noting the suspect just kept hitting the deputy over and over again.

Jenkinson said she felt the suspect was going to kill the deputy if he wasn’t stopped.

The man fired three shots, striking the suspect, who immediately fell over and off of Bardes. The deputy then sat up, talked into his radio, then fell back to the ground and just laid there, according to witness accounts.

Paramedics arrived soon thereafter and administered CPR in an attempt to revive the suspect, but their efforts failed and he was pronounced dead at the scene. Bardes, who was injured during the assault, was transported to the hospital where he was treated and released.

Authorities confirmed the armed citizen, whose name has not made public, had a valid Concealed Weapons License. Witnesses agree the man is a hero and likely saved the deputy’s life.