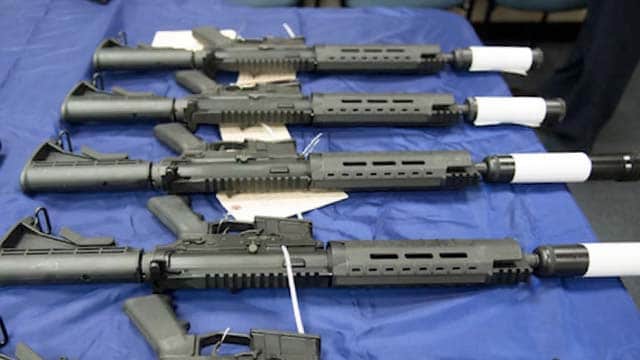 Legal, untraceable gun parts are a booming industry for one Central Florida county, and it has local law enforcement concerned. (Photo: Orlando Sentinel)

At least six such gun-kit makers are operating in Volusia County alone. They make parts for military-style, semi-automatic rifles. The operations are legal, but the booming nature of the business has officials alarmed. One manufacturer claims to sell between 100 and 150 lower receivers a day. The lower receiver houses the trigger mechanism.

“It’s legal, but it’s almost like a loophole in the law,” Port Orange Police Chief Thomas Grimaldi told the Daytona Beach News-Journal. “We’re making it easy for the criminals. I have a concern, a huge concern over that.”

The gun parts don’t have any serial numbers or markings, and don’t require a background check, making them untraceable. The Gun Control Act of 1968 dictates that you don’t need a serial number if you make a gun for your own personal use. The ghost gun makers in Florida meet ATF requirements that say a lower receiver won’t be regulated if it’s less than 80 percent complete. That way, people can finish the receiver at home, and build a legal, untraceable gun.

Law enforcement officials in Florida worry that the ghost guns will make it easy for criminals to get untraceable guns. But the process of building the weapons takes skill, and those familiar with the gun making industry say that’s likely to keep the guns in the hands of experienced firearm owners and hobbyists, not criminals.

“There is a possibility. But Joe Terrorist, he’s not a builder,” Jim Jusick told the Orlando Sentinel. Jusick co-owns Tactical Machining in DeLand, Florida.

Still, with 100-150 lower receivers sold per day, that’s more than 30,000 sold a year from one shop. Some federal officials say it’s naive to think none of those will end up in the wrong hands.

In California, the ATF has seen untraceable guns show up at crime scenes, and knows of transactions of up to 50 gun parts at a time.

“When we look at the sales that have been going on —they’re selling on the Internet to people all over the country,” said Special Agent Graham Barlowe of the ATF’s field office in Sacramento. “And I just can’t imagine that there would be an exception in Florida.