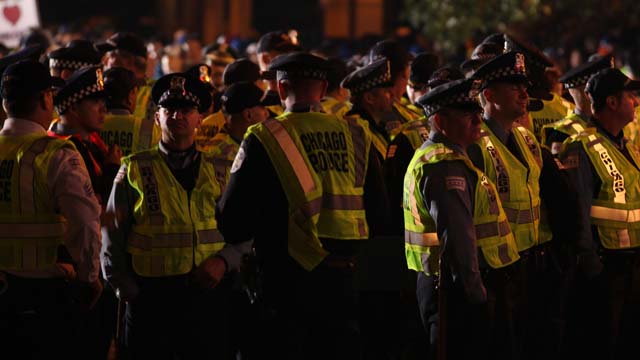 Chicago’s top cop says increased enforcement over the weekend led to a reduction in violence, but 37 people were still shot in Chicago from Friday to Monday.

In a coordinated effort between Chicago police, the FBI and other state and federal agencies, hundreds of officers were deployed to so-called “hot spots” in three major zones of the city. CPD used data from October to try to anticipate where violence and retaliatory shootings might take place, and that’s where they put patrols. The three districts included the Gresham District on the South Side, and the Austin and Ogden districts on the West Side.

“I know that one mission doesn’t erase the tragic violence that we’ve seen over the year,” said Chicago Police Superintendent Eddie Johnson Monday evening. “What it does do, however, is set the stage for additional missions like this to reduce the levels of violence we’ve seen in some of our most affected areas.”

In an email to Guns.com, a CPD spokesperson said officers arrested 44 people during the 28-hour operational period, and 16 of them were felony arrests. A suspect in a September murder case was also arrested for first-degree murder. In addition to arrests, police recovered 12 weapons.

“Most significantly, during this period, only one shooting incident occurred within one of the three zones, which was the result of a party that took place indoors and spilled out onto the street, which resulted in an arrest,” read the email from CPD.

Still, five people were killed and 32 others were injured in shootings citywide over the weekend. The Chicago Tribune notes that it is less than the previous two weekends, but it’s also twice as bad as the same weekend last year, when 18 people were shot.

Johnson says the department will execute more missions like this in the future, though he didn’t specify when. Eventually, CPD will deploy a long-term crime strategy with more officers and resources.

“Our combined efforts were meant to send a clear message to criminals in these communities that their actions will not go without consequence, and let residents know that we’re there to help them take their communities back,” Johnson said.

More than 675 people have been killed in Chicago this year, and the city could easily see more than 700 total murders. That would be the largest number since 1998, according to Tribune data.