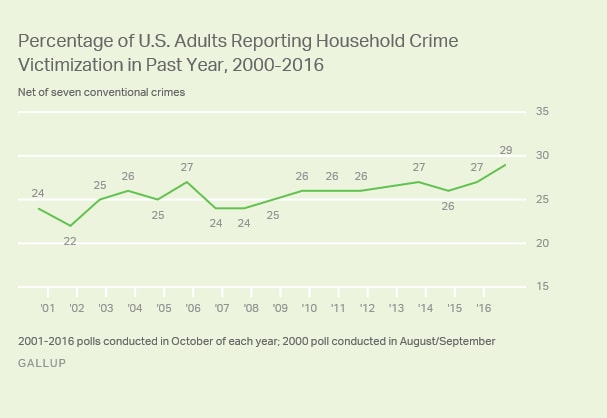 The percentage of Americans who report victimization from “conventional” crime over the past 12 months has hit a 16-year high, according to Gallup.

Some 29 percent of the 1,017 adults surveyed said they or someone in their household experienced criminal victimization, up 2 percent over last year.

Only 16 percent said they personally experienced criminal victimization, well within the 14-19 percent range recorded since Gallup began surveying Americans on the question in 2001.

Saad said the 2016 results continue an upward trend in reported victimization, which has increased 7 percent since 2001.

“In the same poll, Americans’ perceptions of the seriousness of crime nationally and in their local area was unchanged from 2015,” Saad said. “But longer term, it has worsened slightly since 2001. As a result, while crime was not at the top of the candidates’ or voters’ agenda in the 2016 presidential campaign, the issue may be ripe for policymakers at all levels of government to address.”

About 17 percent of respondents said their household had money or property stolen in the last year and 14 percent reported having their home, car or other property vandalized. Only 6 percent reported violent criminal victimization.