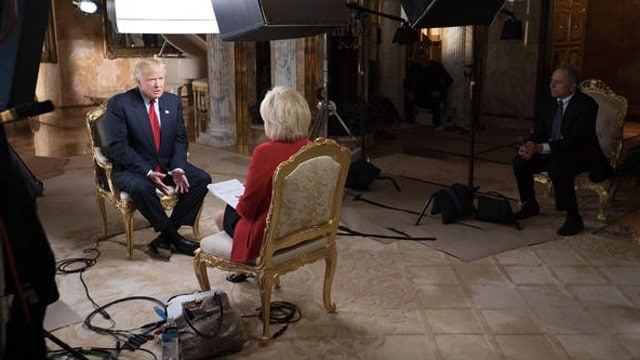 Donald Trump was a bit more soft-spoken during an interview just days after he was elected president. (Photo: CBS)

In his first televised interview since being elected as 45th president of the United States, Donald Trump sat down with Lesley Stahl of “60 Minutes” and touched on a number of hot-button issues, including the appointment of a new Supreme Court Justice, who Trump assured would be “very pro-Second Amendment.”

The interview, which took place Friday, the day after Trump met with President Obama, in the president-elect’s lush New York City penthouse atop the Trump Tower, aired Sunday.

Stahl started the interview by questioning Trump about his win, which she indicated was a surprise to everyone.

“Everyone thought you were going to lose,” she said, but Trump didn’t seem to necessarily agree with that thinking. In fact, citing attendance at a string of speeches over the last three weeks of his campaign – including his final speech in Michigan which drew a crowd of about 31,000 at 1 o’clock in the morning – Trump was very confident about his chances of winning.

“When I left [Michigan], I said, ‘How are we gonna lose?’” Trump said, adding, “This doesn’t look like second place,” in reference to the crowds that attended his speeches.

Trump also admitted that while he has had a great number of experiences and accomplishments in his life, the United States presidency is unlike anything he’s ever done in the past. Nonetheless, he seemed quite confident that he could not only do the job, but do it well, while noting he has great respect for the position.

The president-elect went on to explain that he is not necessarily the person the media has portrayed him to be throughout the campaign trail.

But at the same time, Trump admitted he could be a fighter, a bit on the rougher side when needed, something with which his family agreed later in the interview, but also something he noted was important for being able to take on tough issues. Speaking of the rhetoric for which he became infamous, Trump said he could easily toss that aside, but also said, “Sometimes you need a certain rhetoric to get people motivated.” He said he didn’t want “to be just a little nice monotone character,” but can, if need be and, in fact, said it’s easier. Nonetheless, Trump assured that he would conduct himself “in a very good manner” as president.

When Stahl questioned Trump about his meeting with Obama last week and whether he believed his election win reflected a repudiation of Obama’s presidency, Trump had only kind words to say about the current president personally, but indicated the American people – as a whole – are frustrated with the system.

“I think it’s a moment in time where politicians for a long period of time have let people down,” Trump said.

“When I look at the world and you look at how various places are taking advantage of our country, and I say it, and I say it very proudly, it’s going to be America first… We’ve lost – we’re losing this country…” Trump said. “That’s why I won the election.”

Stahl went on to discuss some of the promises Trump made while on the campaign trail.

He confirmed he would, as previously promised, build a wall to help secure the borders and still plans to deport millions of illegal immigrants who have criminal records, many of which he said are gang members and drug dealers.

Furthermore, with Republicans now the majority in both the House and the Senate – something which has not happened in a long time – Trump said they will now be able to get things done “lickety-split.” In addition, Trump still stands behind his promise to “clean up Washington.”

Stahl probed Trump about who he would choose as the members of his cabinet, but Trump wouldn’t budge on giving her information which he essentially indicated wasn’t anything she needed to know at this time. Likewise, when asked about how he planned to fight ISIS, Trump indicated it wasn’t information that should be made public.

However, while he didn’t name any names, Trump did confirm that the Supreme Court Justice he chooses will be both pro-life and pro-gun.

Stahl then moved on to the backlash that has come about since Trump’s win, namely the protests – some of which have turned violent – in cities across the country. Stahl said those protesting are afraid of what’s to come under a Trump presidency, but Trump’s message to those harboring fear was simple.

Trump also noted that if the tables were turned and Hillary Clinton won the election instead and Trump’s supporters started protesting, it would be an entirely different scenario.

Trump went on to say that he was saddened to hear stories about his supporters engaging in acts of violence, intimidation or harassment, but alluded to the fact that he thought those instances were few.

“And I say, ‘Stop it.’ If it helps. I will say this, and I will say right to the cameras: Stop it,” Trump said, while assuring that his desire is to bring unity to the country, not division.

Soon thereafter, Trump’s wife, Melania, as well as his four adult children – who have been by his side on the campaign trail – joined him in the interview.

The future First Lady wants to use that platform to do good for the country and again confirmed that she has an interest in fighting cyber bullying.

“I think it’s very important because a lot of children and teenagers are getting hurt,” said Melania Trump, who incidentally is only the second First Lady in history to be born outside of the United States. “And we need to teach them how to talk to each other, how to treat each other and to, to be able to connect with each other on the right way.”

Ivanka, Trump’s daughter, squelched rumors that she may be a part of the Trump administration.

“No. I’m going to be a daughter,” she said with a smile, but indicated there were still issues – such as wage equality, childcare, and education – that she was passionate about and would like to fight for.

Likewise, Trump’s sons, Eric and Donald, Jr., indicated they would stay in New York to tend to the family business while their father served as Commander in Chief. And when Stahl questioned whether they thought the campaign hurt the Trump brand, Ivanka responded by saying she didn’t think it mattered.

“This is so much more important,” Ivanka said of her father’s presidency.

“I think what Ivanka trying to say is, ‘Who cares? Who cares?’” Trump interjected. “This is big league stuff. This is our country. Our country is going bad. We’re going to save our country. I don’t care about hotel occupancy. It’s peanuts compared to what we’re doing… It’s unfair what’s happened to the people of our country and we’re going to change it. As simple as that.”