Iowa man's stabbing rampage stopped by a man with a gun 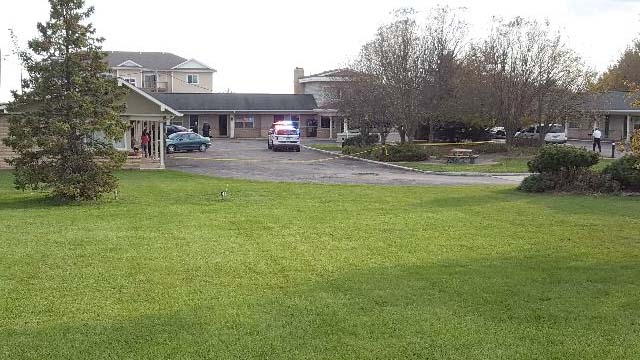 The scene of the Oct. 17 double stabbing in Cedar Falls, Iowa that was stopped by a man with a gun. (Photo: Myke Goings/KCRG-TV9)

Police say an Iowa man had stabbed two people repeatedly last month before a man pulled a gun and ordered the attacker to get on the ground.

Adam Scott Jacobsen, 28, stabbed Jeffrey Miller 24 times and Denice Bennett eight times at an apartment complex before Daniel Williams drew his firearm, according to police. “He pulled the gun and ordered him to lie on the ground,” said Cedar Falls Police Chief Jeff Olson. He said Jacobsen stayed on the ground until police got there, and that Williams holstered his gun before police arrived.

Police say the attacks happened in different parts of the apartment complex, and it appears Jacobsen chose his victims randomly. Both people were seriously injured, but survived. Jacobsen has been charged with two counts of attempted murder. His trial has been put on hold while the court determines his mental competency.

According to court records, Jacobsen told investigators that demons were everywhere and that they were killing people. He said God told him to kill the demons, and that he killed one of them, but accidentally killed a “good person.”

Jacobsen’s mother, Laura Sager, says her son was diagnosed with schizophrenia about four years ago, and struggled to find proper care, saying institutions wouldn’t take him as a client. “They get to pick and choose who they have for mental health, and so they are going to choose the little old lady that can’t make her own food. Nobody will take Adam,” she said.

Jacobsen had been admitted to the mental health unit of a local hospital for “hearing and seeing things” a couple weeks before the attack, but was released.

Public Defender Aaron Hawbaker says Jacobsen was in a catatonic state after the attack as he was booked at the Black Hawk County Jail. He was moved to a local hospital for psychiatric treatment just days after the attack.

Authorities say the man with the gun, Daniel Williams, had a permit to carry. Police wouldn’t say whether they believed Jacobsen would have continued stabbing people without Williams’s intervention.

Attempted murder is punishable by up to 25 years in prison. The defense requested a delay in the trial Monday while Jacobsen is evaluated, a move the prosecution didn’t resist.