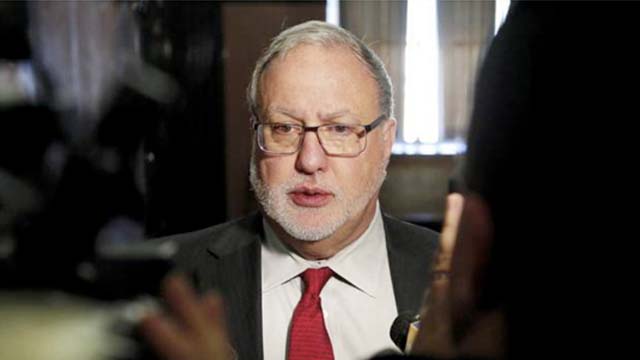 Oklahoma lawyer Doug Friesen marketed himself as “Your Gun Lawyer” on his website. He was disbarred late last month for misconduct. (Photo: Jim Beckel/The Oklahoman)

A prominent “gun lawyer” in Oklahoma was disbarred from the legal profession for misconduct late last month.

The Oklahoma Supreme Court banned Doug Friesen from practicing law in Oklahoma and ordered his name stricken from the attorney rolls. The court says Friesen was punished because he mishandled nearly $100,000 paid out in a wrongful death case.

The misconduct stems from a payout related to work Friesen did for a couple in 2009. The couple’s 11-year-old daughter was killed in a car accident, and their wrongful-death case was settled for $675,000.

Friesen and the couple divvied up the money accordingly, but had a dispute over $97,438. Alma Nevarez said she thought Friesen was going to put the money into a college fund for Nevarez’s three other children. Friesen said there was a misunderstanding, and the money was a second legal fee. The couple sued him, and he gave all the money back, but the damage was done for the attorney.

The court said Friesen brought discredit to the legal profession.

“This court’s responsibility in disciplinary proceedings is not to punish the offending lawyer,” Justice Douglas Combs wrote. “The purpose of discipline is to protect the public, preserve the integrity of the bar and deter similar misconduct.”

This isn’t the first time Friesen’s been in trouble. In 2014, the Supreme Court suspended him after he was sentenced for three misdemeanor tax offenses. He says his tax troubles stemmed from an ex girlfriend who embezzled money from his firm.

On his website, Friesen calls himself “among the most experienced and respected Second Amendment attorneys in the nation.” He’s had his hand in several high profile shooting cases.

The Supreme Court announced the decision to disbar Friesen on Oct. 25.