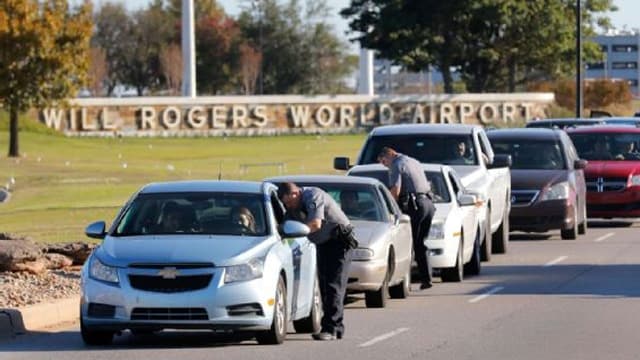 Airport operations are believed to be back to normal Wednesday, although the crime scene areas will remain closed. (Photo: AP)

Two men have died after a shooting at the Will Rogers World Airport in Oklahoma City Tuesday afternoon.

Police received a call about a shooting in progress just after 1 p.m., Oklahoma City police Capt. Paco Balderrama said in a press conference, noting that the response from both local law enforcement and airport personnel was exceptional.

The victim was quickly located and transported to the hospital, but succumbed to his injuries. He was identified as Southwest Airlines employee 52-year-old Michael Winchester, the father of Kansas City Chiefs long snapper James Winchester.

The shooting led to an hours-long manhunt for the suspect, who was eventually found in a parking deck, inside a red pickup truck believed to belong to the suspect. Balderrama said authorities used special methods to blow out the windows of the truck, not knowing initially if the suspect was hiding, sleeping or something else.

When officers approached the truck, they realized the man had what appeared to be a self-inflicted gunshot wound. He was pronounced dead at the scene and as of Tuesday night had not been positively identified.

Balderrama said the shooting was not what they would consider an active shooter situation, nor was it random. In fact, authorities have reason to believe Winchester was targeted and the shooting premeditated. However, police have not released an exact motive at this time.

Despite believing the act was premeditated, Balderrama said the department made the call to keep the airport on lockdown while they spent several hours sweeping the airport and ensuring there were no other possible dangers. He noted that there were just too many unknowns and they wanted to “play it safe.”

The airport was reopened Tuesday evening, but Balderrama said the crime scene areas will remain closed. Southwest Airlines spokeswoman Karen Carney said the airline had approximately 25 cancellations. She urged anyone planning to fly in or out of the airport in coming days to reschedule, if at all possible. Carney also confirmed the airline is waiving any fees for cancellations and reschedules.

Southwest Airlines said in a statement they are “deeply saddened by the passing of our Southwest Family Member, and we extend our heartfelt sympathies and support to his family and Southwest co-workers at this time.”

“Our love and support is with James and the entire Winchester family. Our heartfelt thoughts & prayers are with you,” the post read.