Three men charged in shooting death of Marine in LA 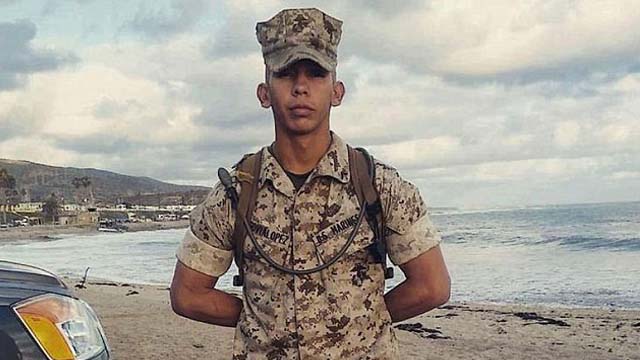 Lance Cpl. Carlos Segovia was shot and killed while driving in south L.A. on Sept. 16. Three men have been charged in connection with his murder. (Photo: Facebook)

Lance Cpl. Carlos Segovia was on leave from Camp Pendleton on Sept. 16 when he went to visit his girlfriend in south L.A. Investigators said he was driving his car and exchanged some words with the suspects, who may have been in the process of committing a crime. Segovia was found slumped over the steering wheel of a Dodge Charger and died three days later at the hospital. Now, three alleged gang members are being charged in connection with the murder.

Oscar Aguilar, 26, and Esau Rios, 28, are being charged with murder, according to the Los Angeles District Attorney’s Office. Ricky Valente, 18, faces an accessory charge.

Police said Segovia was driving and was on his cell phone when he was shot. He lost control and crashed into a parked car.

“It is very possible that he might have seen some suspicious activity or even a crime in progress, and it appears to us that something happened in that instant where he was killed,” LAPD Capt. Peter Whittingham said.

The case “includes allegations that the crimes were committed in association with, or for the benefit of, a criminal street gang and that Aguilar personally and intentionally used a firearm for the killing,” according to a release from the DA’s office.

Segovia’s loved ones pulled him off life support three days after the shooting, after doctors told them he wouldn’t make it. His family says Segovia was active in his community, volunteering and encouraging at-risk youth to join the Marines.