A Giuliani cabinet appointment would mean confusion for Senate Republicans 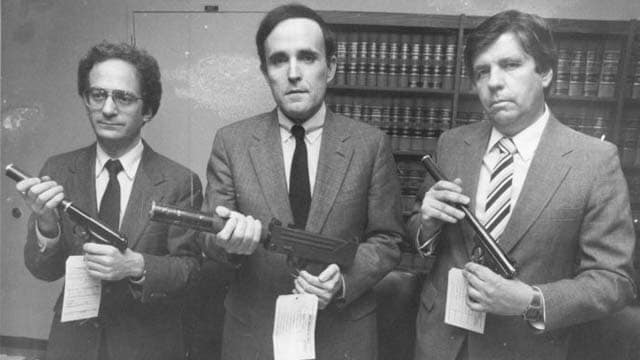 President-elect Donald Trump is rumored to be considering Rudy Giuliani for a cabinet position, a move that has onlookers questioning how Republicans in the Senate will vote for him, given their voting record on President Obama nominees with similar views on gun control.

Giuliani was the mayor of New York City from 1994 to 2001, and was a big gun control advocate in those years. He’s gone back and forth on elements of the issue, but as recently as July, he snubbed the NRA, saying he supported gun bans for people on the terror watch list. Now, he’s rumored to be Trump’s top pick for Secretary of State.

The Republican controlled Senate would have to confirm Giuliani next year. And their standards for Obama nominees the last eight years have involved a pro-gun test. It’s unclear if Senate Republicans will hold to that test, or defer to the party’s new head of state.

The Senate didn’t start applying the gun test so harshly until Majority Leader Mitch McConnell went to the NRA and asked them to grade lawmakers on votes for presidential nominees. Usually Senators are graded on legislative positions, but McConnell wanted a way to mount a united front against Obama. It worked, and the NRA has kept at it, putting pressure on Senators to fall in line and vote a certain way to stay in the NRA’s good graces.

Unable to leverage the national spotlight he found on 9/11 into higher office, Giuliani has aligned with the Trump camp for months. When he ran for president in 2008, he said 9/11 changed his views on gun control. But he’s called for universal background checks as recently as 2013.

“Can a lobby that once opposed a surgeon general nominee because of a one-off tweet about guns really now throw its support behind Giuliani, the Republican party’s most consistent anti-gun crusader of the past quarter-century?” asks Adam Weinstein at The Trace.

It’s unclear, but it’s one of many politically murky areas Republicans will have to face as the Trump presidency gets under way.