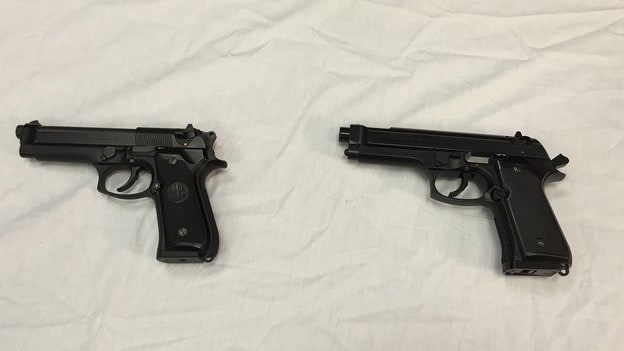 “It’s something that we should do for the safety of our children,” City Council President Bernard C. “Jack” Young told the Baltimore Sun on Monday. “We’re getting stores robbed with replicas. We’ve got people running around with these things and they almost look real. … I don’t think we should be allowing replica guns in the city of Baltimore, especially with the murder rate we have.”

Similar incidents have unfolded across the country over the last three years, spawning bans in cities like Boston, New York and Chicago. In September, police officers in Columbus, Ohio, shot and killed 13-year-old Tyree King after the teen pulled a BB gun from his waistband during questioning over a reported armed robbery in the area.

The City Council bill punishes possession of replicas — including BB guns, air rifles and pellet guns — with a $250 fine for first offenses and a $1,000 fine for all subsequent offenses. Repeat offenders who are caught more than twice with the replicas face a misdemeanor charge and a maximum 30-day jail sentence.

Opponents of the bill argue it’s a waste of money and would criminalize residents for the possession of “otherwise perfectly legal toys.”

“The bill is hopelessly vague and subjective,” wrote Mark W. Pennak, president of Maryland Shall Issue, in an Oct. 20 letter addressed to City Council. “Citizens simply have no way of knowing if the replica can be reasonably perceived to be a real firearm. There are no definitions and no safe harbor provisions. It appears to sanction effectively arbitrary seizures by law enforcement personnel and those seizures are subject to review only through elaborate and expensive proceedings that can only be navigated by a lawyer. The risk of a wrongful seizure is great.”

Pennak also argues the ban violates federal law, which protects the sale of some replica firearms.

“We do not believe that the bill, as written, significantly benefits the citizens of the City of Baltimore,” he wrote. “There are better ways to address the underlying concerns without flouting federal law and without subjecting the citizens of the city to the spectre of arbitrary arrest and prosecution for violations of a vague law will likely accomplish little at potentially great cost.”

The Council is expected to hold a final vote on the bill next month.