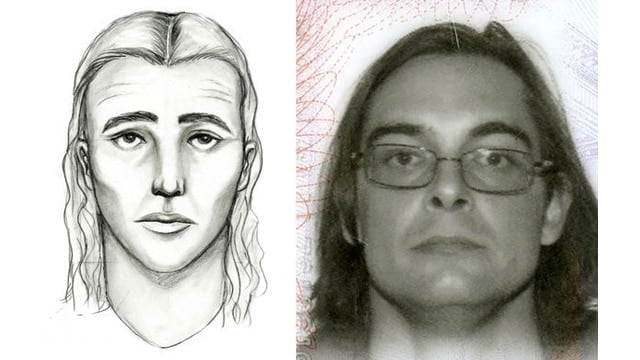 A person of interest sketch, left, that police say links Ritchie to the July killing of Treyveonkindell Thompson. On the right is a handout photo of James Dale Ritchie, who was killed Saturday in a shootout with police. (Photo: Anchorage Police Department)

A gun used in a shootout with police last weekend in Alaska has been linked to five unsolved murders in Anchorage.

Officials in Anchorage say the gun was used in a July 3 shooting that killed Jason Netter and Brianna Foisy. They were found dead on a bicycle trail near downtown Anchorage. The gun was also used in the July 29 shooting death of Treyveonkindell Thompson, who was found dead on an isolated road. On Aug. 28, the .357 was used to gun down Bryant De Husson and Kevin Turner, who were found in a park.

The gun was not registered to Ritchie, and police say he was not on their radar.

“That’s part of what they’re trying to determine is, where he’s been, who he’d lived with, what other contacts he had,” said Anchorage District Attorney Clint Campion. “He hasn’t had any real police contact in the last decade in Alaska.”

Police say a person of interest sketch places Ritchie at the crime scene where Treyveonkindell Thompson was killed. They say they can only link the gun to the other homicides, and they’re trying to figure out if Ritchie, or someone else, pulled the trigger.

The officer shot last weekend, Arn Salao, was hit four times during the shootout. He was in surgery for seven hours on Saturday, and was out of the intensive care unit.

Anchorage Police Chief Chris Tolley called Salao heroic. “(He) made sure that this individual will not hurt any one of your or any one of the citizens of Anchorage,” he said, according to the Associated Press. “I’m so very, very proud of them.”

Tolley said Salao is a fighter, and he’s determined to live.