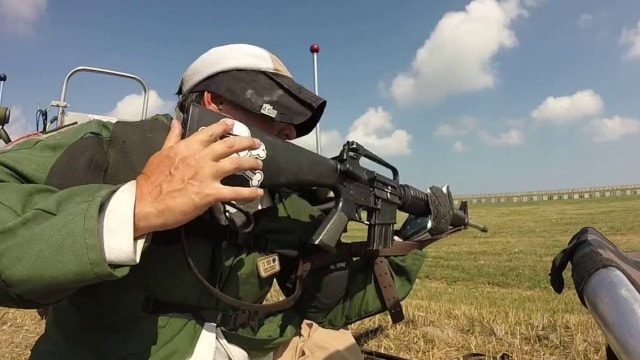 The NRA’s National High Power Rifle Championships will be on the move from Camp Perry to a new home in 2017. (Photo: Mark Muraoka)

The National Rifle Association announced Wednesday they will move the century-old event from its historic home to Camp Atterbury, Indiana next year.

The event, held during Camp Perry’s Civilian Marksmanship Program’s National Matches each summer, wrapped up its latest competition this August.

The move to Camp Atterbury, like Perry a National Guard training facility, will be scheduled to end on July 13th, 2017 to allow competitors to attend the CMP National Trophy Matches set up later that month.

Dennis Willing, director of NRA Competitive Shooting, is promising to, “change the face of High Power Rifle as a discipline,” and said the move, which still needs approval from the NRA Board of Directors, will be for the best.

“The NRA High Power Rifle Committee met and determined it would be beneficial to all competitors if we moved the Championship from Camp Perry to another site,” said Willing. “After much discussion, the range at Camp Atterbury, IN, was selected as the new home of the NRA National High Power Rifle Championships.”

As for the CMP, they will be adding new events to the National Matches in coming years while the 2017 calendar will remain the same.

“In an effort to continue to attract new competitors and to reward the thousands who annually participate in our matches, the CMP will add new pistol, smallbore, high power rifle, and long range rifle matches in 2018,” said Mark Johnson, CMP Chief Operating Officer, in an email Thursday.

The CMP has invested in Camp Perry with electronic targets on Petrarca Range, the Bataan Armory, their headquarters building, the CMP North Store, and the Gary Anderson CMP Competition Center.

“The tradition of the National Matches at Camp Perry will continue, supported by the CMP and the Ohio National Guard, with or without the participation of other organizations,” said Johnson.