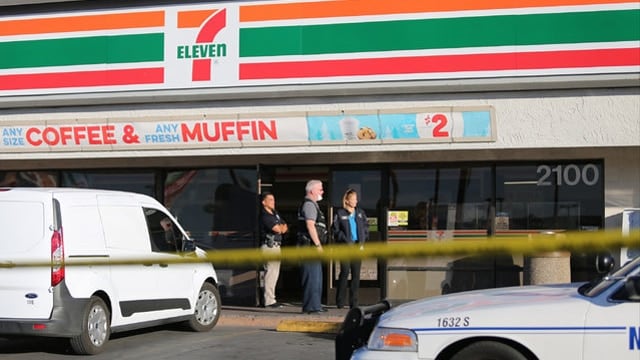 In the two weeks before the shooting, the 7-Eleven, as well as several other nearby businesses, were targeted in about half a dozen robberies. (Photo: Las Vegas Review-Journal)

A young man believed to be responsible for a string of robberies in Las Vegas was shot and killed by an armed slot machine guard during an attempted robbery at a 7-Eleven last week.

The suspect entered the convenience store around 3:30 a.m. Nov. 10 armed with a gun and wearing a hoodie with a blue bandanna covering his face. The suspect approached the clerk and demanded cash, and that’s when another man, who was also armed with a gun, intervened.

The suspect then ran out of the store, but collapsed in the back parking lot soon thereafter. When police arrived on the scene, after being alerted to the incident through a silent alarm, they found the suspect, who died from his injuries.

The suspect was identified as Rashad Ryan, 24, and authorities have reason to believe he was responsible for several recent robberies, including another at the same 7-Eleven just days prior. In the two weeks leading up to the robbery and subsequent shooting, a smoke shop near the 7-Eleven was robbed twice, as well as a Taco Bell and a Metro PCS store. Officials say in each of those robberies the suspect wore the same clothing and images taken from surveillance video during the previous robberies appear to be Ryan.

Additionally, the 7-Eleven was the same location where 38-year-old store clerk, Suchinna Revtissamaharamaye, was shot and killed during a violent armed robbery by two suspects back in 2010.

“They were after the money,” said Chrissie Coon, who was the North Las Vegas police spokeswoman at the time. “And during that robbery, at some point, they decided to murder the clerk.”

Both suspects were captured and pleaded guilty to their charges. Jason Miller is serving life in prison without the possibility of parole, while Jerome Bolton is serving a 10 to 25-year sentence.

Cavaricci said authorities never encourage citizens to put themselves in danger during such situations and, when possible, it’s best to call the police and let them handle it. Cavaricci also said defensive shootings can sometimes be “tricky” and are investigated on a case by case basis, but noted that they are generally justified when there is an imminent threat against one’s life.

“In this case, there was an armed robbery going on and he felt that he needed to take action,” Cavaricci said of the guard, who was not an employee of 7-Eleven, but contracted to watch the slots.