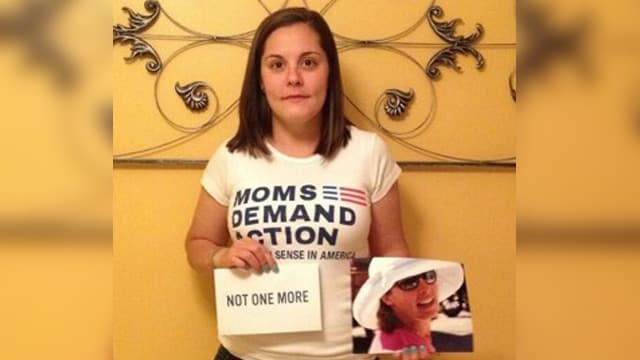 Erica Lafferty in a photo from the Everytown for Gun Safety website. (Photo: Everytown.org)

Lafferty’s mom, Sandy Hook Elementary School Principal Dawn Lafferty Hochsprung was killed four years ago while protecting her students. Now, Erica works at Everytown for Gun Safety, and has been fighting for expanded background checks and other gun control measures ever since her mother’s death. In a piece for The Hill, she wrote that Ayotte’s record on guns meant she had it coming on Election Day.

“For me, it was a bright moment in a challenging election,” wrote Lafferty.

“I wanted a better explanation of Ayotte’s vote against expanded background checks – a policy that 82 percent of Americans and 74 percent of NRA members support,” wrote Lafferty (her source).

She says she’s tweeted at Ayotte every week for months, asking her to meet for lunch, or inviting her to come over for the holidays and look at pictures of her dead mother. But Ayotte hasn’t replied.

“Last week, New Hampshire voters had the chance to tell Ayotte how they felt about her record,” wrote Lafferty. “Mommy and all my fellow survivors of gun violence, this one’s for you.”