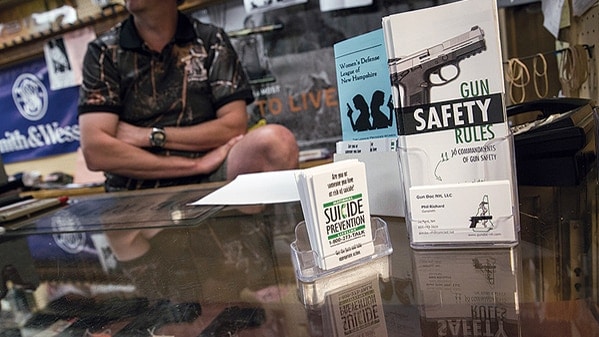 Two Harvard researchers and a New Hampshire gun dealer want to lower suicide rates through more partnerships between the healthcare and firearm industries, according to an editorial published Monday in the Journal of the American Medical Association.

Together, the three created the Gun Shop Project, in affiliation with the New Hampshire Firearm Safety Coalition, which distributes suicide prevention material to gun shops across the state.

Barber, Frank and Demicco write 85 percent of New Hampshire’s firearm deaths are classified as suicides, but thanks to their efforts, nearly half of the state’s 65 independent gun shops are promoting the group’s posters and brochures advocating for the “11th Commandment of Firearm Safety: Be alert to signs of suicide in friends and family and help keep firearms from them until they have recovered.”

“Rather than squaring off against one another — as exemplified by the passage of Florida’s so-called ‘Docs vs. Glocks’ law that prohibits physicians from routinely asking patients about guns — participants jointly devise strategies to put time and distance between a suicidal person and a firearm,” the group writes in the JAMA editorial. “Seven years ago, when we began this work in New Hampshire, similar projects did not exist. Today projects are under way in more than 20 states.”

Frank, during a 2014 interview with CNN, said the Gun Shop Project’s goal is “two-fold” — educate gun shop owners in aiding suicide prevention by rejecting a sale to someone who is “actively suicidal” and “utilize gun shops as a place to educate customers on the tie between suicide and firearms.”

“The common ground is that everybody — regardless of whether they’re pro-gun — virtually everybody is anti-suicide,” she said.

The collaboration has inspired other suicide prevention efforts across the country, the group says, including a module that became part of Utah’s state curriculum for concealed carry permit seekers. In August, the National Shooting Sports Foundation and the American Foundation for Suicide Prevention announced a partnership to develop suicide prevention materials aimed at gun owners.

While the group admits gun owners “are no more likely than non-owners to consider or attempt suicide,” the deadliness of suicide attempts using guns puts them at higher risk.

“Substitute virtually any suicide method for a gun and an attempt is less likely to be deadly,” the group writes. “Given the temporary nature of many suicidal crises, saving a life in the short term often saves the life of that person in the long term, as 90 percent of people who survive a suicide attempt — even nearly lethal attempts — do not go on to take their lives thereafter.”