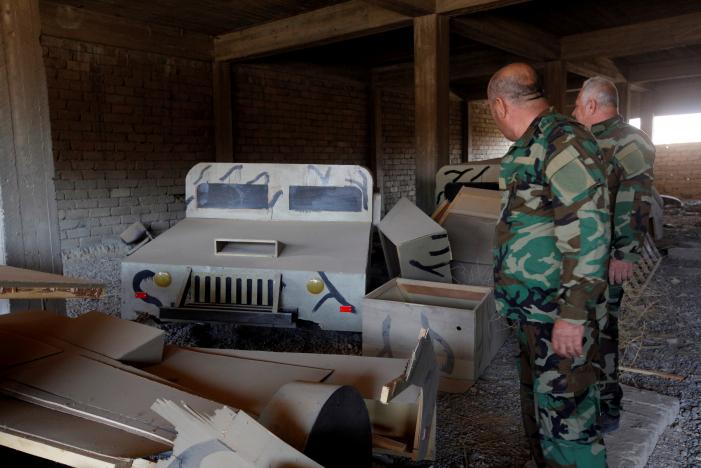 Iraqi soldiers look at a fake hummer made of wood used by Daesh near Mosul, November 2, 2016. (Photos: Alaa Al-Marjani/Reuters)

Reports from Iraqi and allied forces advancing around Mosul is that the Islamic State forces are using bearded mannequins, wooden tanks and other props to help draw fire away from their positions.

“As our troops advanced toward the areas we were charged with liberating, Daesh used tanks and vehicles made of wood to divert the military planes,” said Lt. Colonel Abbas al-Azaji as reported by Reuters.

While easy to discern as fakes up close, from the soda-staw eyes of a drone camera hundreds of feet in the air, or the binos of a commander a half-mile out, they look a lot like the real thing. 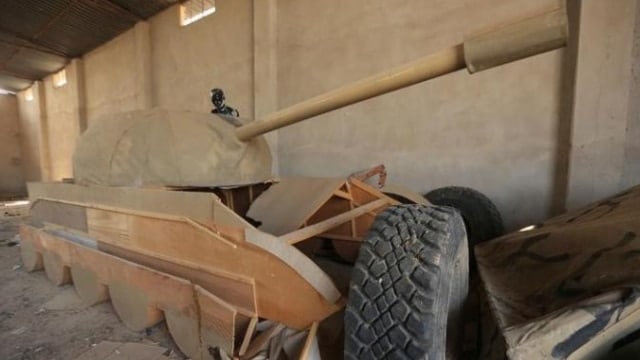 However, a U.S. Air Force spokesman said the allies are taking it in stride.

“We call it tactical deception. Daesh has been doing it and that’s certainly a tactic that enemies like to use,” Col. John Dorrian said.

The thing is, the U.S. military has done this for 150 years.

Back in the Civil War, both sides mounted “Quaker Guns” in earthworks which were nothing but felled tree logs painted and arranged to resemble artillery pieces from a few hundred yards away. By doing so, a small force could tie down a much larger one set to besiege it.

In WWII, before being turned lose on Northwest Europe with his mighty tank legions, Gen. Patton was given command of a ghost army, the 1st U.S. Army Group (FUSAG), which was used to fake out Hitler into believing the D-Day invasion was a diversionary attack for the real thing.

As outlined by Europa News, this continued through the end of the war.

Further, as this newsreel shows, the camouflage units of inflatable tanks and artillery pieces remained in service for some time. Quaker Guns, redux.

Similar deception tactics were used in Korea, Vietnam and, more recently, in the Gulf Wars.

During the opening hours of Operation Desert Storm, a handful of Navy SEALs and Special Boat Unit personnel used a small force of souped-up speedboats to plant demolition charges and beacons to indicate a large scale  amphibious landing was underway along the coastline, pinning down significant Iraqi forces who just knew the Marines were fixing to storm the beach as their line of withdrawal was cut off and they were bypassed.

So in the end, the IS tactic is just a case of “everything old is new again.”