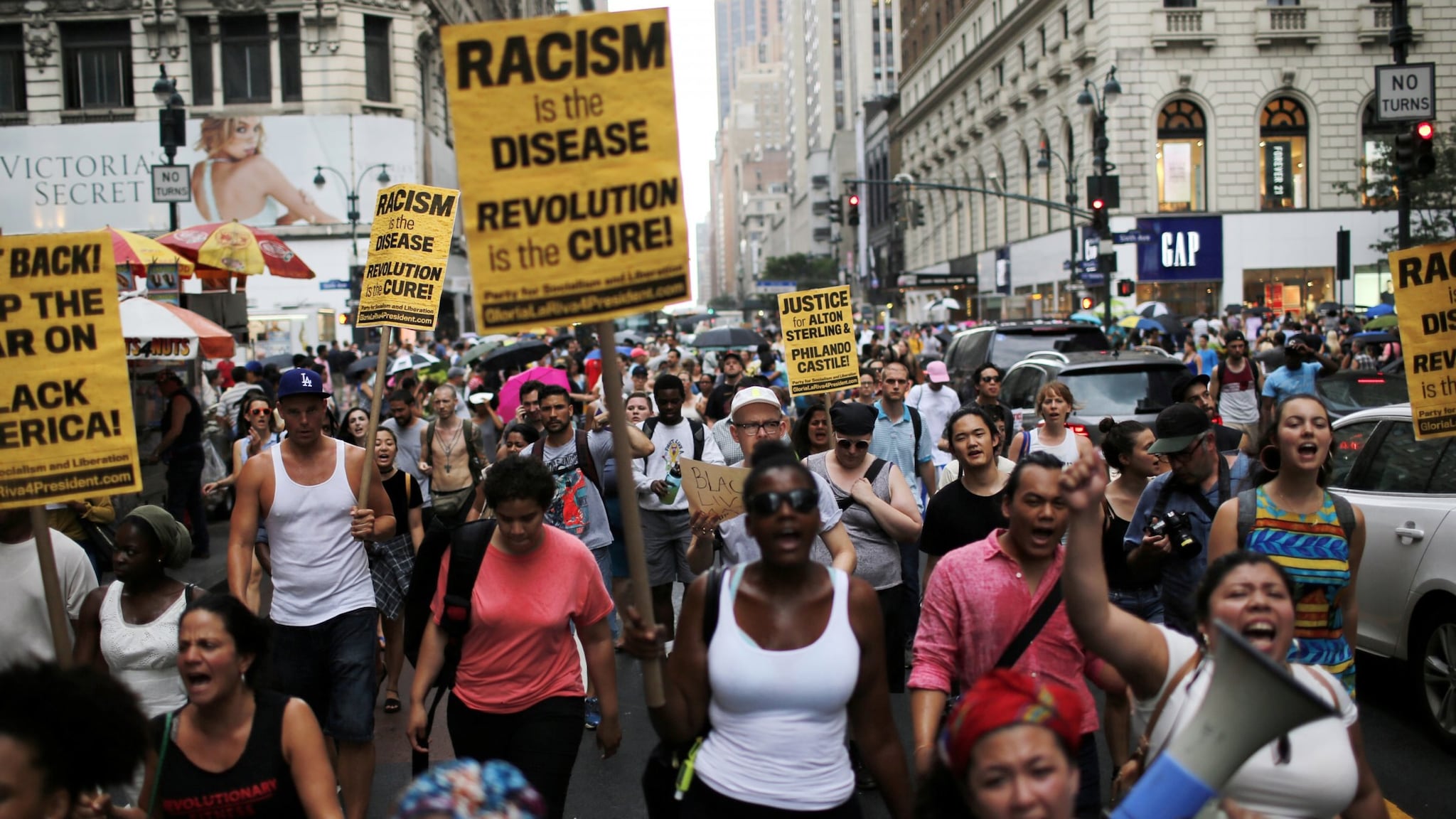 Protesters marching in the streets of New York after the killings of Alton Sterling and Philando Castile (Photo: Eduardo Munoz/Reuters)

Dr. John Lott, an economist who researches gun violence and author of “The War on Guns,” says in the 34-page study it’s impossible to disprove what he calls the racism hypothesis — that white officers shoot and kill black suspects at a higher rate solely because of racial bias. Rather, he writes, it’s conceivable to test the opposite idea: police shootings are race-neutral.

If evidence suggested officers factored in race when deciding to pull the trigger, Lott says the race-neutral hypothesis would be disproven, therefore giving credence to the narrative of racial bias in police relations with the black community.

His data, he writes, contradicts that narrative entirely. “White officers are significantly less likely than black officers to kill black suspects, and they are not statistically significantly different from Hispanic, other race, and unknown race police officers,” he wrote. “Controlling for the violent crime rate alone or with the proportion of young black men reduces the estimated intercept, consistent with the race neutral hypothesis.”

Lott compiled a detailed list of 2,699 fatal police-involved shootings between 2013 and 2015 using FBI and CDC data, articles retrieved from Lexis/Nexis, Google and other online databases. Lott and study co-author Carlisle Moody explain the extensive efforts they took to flesh out the multiple data sets, which are often missing information about the officer’s race or gender, for example, and sometimes fail to record every police-involved killing occurring in a given year.

The FBI and CDC missed over 2,000 cases combined and The Washington Post’s daily tracker recorded 18 fewer incidents in 2015 than Lott and Moody uncovered during their research.

“Our data show that blacks make up 25 percent of those killed by police, but only 12 percent of the total population,” Lott wrote. “Is this disproportionate representation due to racism on the part of white police officers?”

Lott and Moody say no, suggesting in their study even a “color blind police force” would still use lethal force against black suspects at a disproportionate rate because crime levels across neighborhoods differ and police dedicate resources to “hot spots” of illegal activity — generally found in black neighborhoods with a high concentration of poverty. Both factors drive more fatal encounters between majority white police and black suspects, the researchers concluded — not racial bias.

He isn’t the first researcher to report no apparent link between racism and police shootings, either.

Roland G. Fryer, a Harvard economics professor and the first African American to win a John Bates Clark medal, told the New York Times he turned to number crunching after the deaths of Michael Brown and Freddie Gray left him angry and helpless.

“You know, protesting is not my thing,” he said. “But data is my thing. So I decided that I was going to collect a bunch of data and try to understand what really is going on when it comes to racial differences in police use of force.”

So Fryer and a team of student researchers compiled police reports from 10 cities across Texas, California and Florida, searching for an answer to whether officers fired more readily on black suspects.

The resulting paper — released in July and awaiting peer review — came to some controversial conclusions: racial bias was evident in police non-lethal use of force, but not in the case of fatal shootings. Results from Houston, Texas, even showed officers were 20 percent less likely to fire at black suspects.

Lott and Moody wrote Fryer’s study most closely relates to theirs, though argue their data covers a far wider swath of the country, hitting 1,500 cities and towns across all 50 states.

“Fryer has also been criticized for relying on arrest reports to determine whether the incident was one in which the officer had to decide whether to use lethal force,” Lott wrote in the study. “If there is bias in the officer’s attitude toward blacks, then that bias is likely to extend to the decision of whether to arrest or not. If so, then Fryer’s study suffers from selection bias.”

Other critics of Fryer’s research, and other studies like it, insist it’s irresponsible to push such conclusions when the field of research on police use of force remains in its infancy.

Sharad Goel, a professor at the Stanford School of Engineering and a member of the research project Law, Order and Algorithms, told The Huffington Post in July he would be hesitant to declare any single scientific study shows similar rates of injuries and death in police custody between minorities and whites.

Last month, the Department of Justice announced progress in creating such a database, a response to the 2014 Death in Custody Reporting Act, that would fill in the gaps of nationwide reporting on police use of force.

Congress passed the DCRA amid ongoing civil unrest spurred by police-involved shootings of unarmed civilians. Yet, the law only requires state and federal agencies report on lethal uses of force. Attorney General Loretta Lynch said the FBI launched the comment period Oct. 5 for a pilot program, called National Use-of-Force Data Collection, to gather input on a public database of both fatal and non-fatal police incidents resulting in “serious bodily injury.”